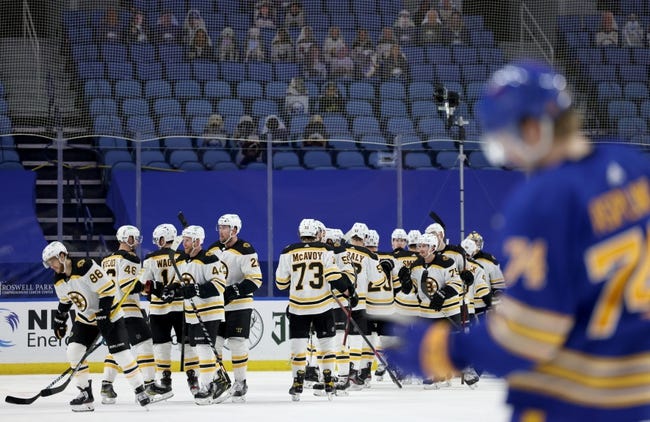 The Boston Bruins and Buffalo Sabres meet Friday in NHL action at the KeyBank Center.

The Boston Bruins look for a win to build on their six-game winning streak. The Boston Bruins are averaging 2.8 goals per game and are scoring on 22 percent of their power play opportunities. Brad Marchand leads Boston with 24 goals, David Krejci has 23 assists and Patrice Bergeron has 146 shots on goal. Defensively, the Boston Bruins are allowing 2.5 goals per game and are killing 85.7 percent of their opponents power plays. Tuukka Rask has given up 39 goals on 465 shots faced and Jaroslav Halak has allowed 41 goals on 456 shots.

The Buffalo Sabres need a win after losing six of their last nine games. The Buffalo Sabres are averaging 2.4 goals per game and are scoring on 21.4 percent of their power play opportunities. Sam Reinhart leads Buffalo with 17 goals, Rasmus Dahlin has 16 assists and Victor Olofsson has 107 shots on goal. Defensively, the Buffalo Sabres are allowing 3.4 goals per game and are killing 78.3 percent of their opponents power plays. Carter Hutton has given up 39 goals on 341 shots faced and Linus Ullmark has given up 49 goals on 591 shots.

The Boston Bruins are playing some of their best hockey of the season right now and continue to absolutely dominate the Sabres, which includes 10 straight wins overall and five wins this season. The Bruins beat the Sabres 5-1 last night and have outscored them 7-1 in the last two meetings. The Buffalo Sabres can't get their offense going and it feels like they're counting the days until the end of the regular season. The history between these clubs leads me to taking the Bruins and the PL for max betting value.