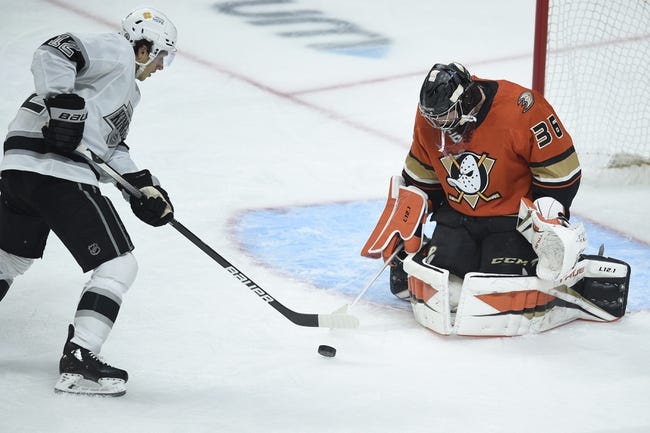 The Los Angeles Kings and the Anaheim Ducks meet in NHL action from the Honda Center on Friday night.

The Los Angeles Kings will look to rebound from a 3-2 loss to the Ducks in their last matchup. Anze Kopitar leads the Kings in scoring with 46 points including 11 goals and 35 assists while Drew Doughty has 33 points with 25 assists this season. Dustin Brown has a team-high 17 goals as part of his 29 points this season while Adrian Kempe, Alex Iafallo and Andreas Athanasiou all have double-digit goals and assists this season. As a team, Los Angeles is averaging 2.7 goals on 29.5 shots with a 20% success rate on the power play while allowing 3 goals on 30.8 shots with an 84.2% success rate on the PK this season.

The Anaheim Ducks will try to build on their win over the rival Kings in their last game. Max Comtois leads the Ducks in scoring with 28 points including a team-high 13 goals and 15 assists while Rickard Rakell has 26 points with a team-high 18 assists. Cam Fowler has 20 points with 15 assists while Adam Henrique has 11 goals and Troy Terry’s got 17 points with 7 goals and 10 assists this season. As a team, Anaheim is averaging 2.2 goals on 26.6 shots with a 9.8% success rate on the power play while allowing 3.2 goals on 30.9 shots with an 80% success rate on the PK this season.

I get the allure of the Ducks as a home dog, but the Kings continue to put the boots to the Ducks despite the loss last time out and while the chances are slim, the Kings are the only team here with any hopes of fighting for a playoff spot. I think the Ducks have mailed it in. Give me the Kings in this one.