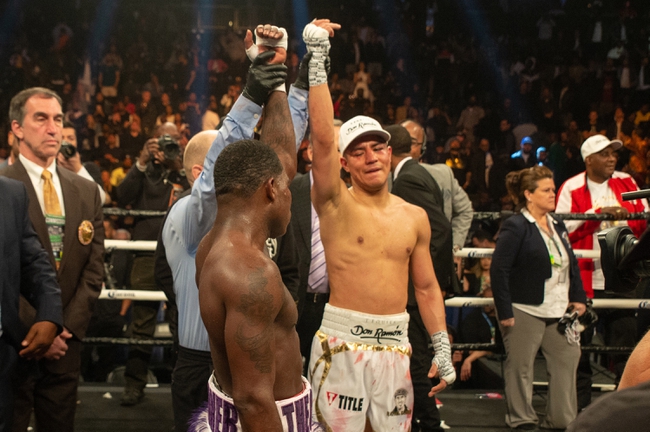 Mikey Garcia and Jessie Vargas fight Saturday at the Ford Center at The Star for the World Boxing Council Diamond Welter Title.

Mikey Garcia enters this fight with a 39-1 record that includes 30 knockouts. Garcia has won five of his last six fights, and he’s coming off a March loss to Errol Spence. Garcia has had a long time off to recover from his first career loss, a fight where the size of Spence played a massive role and made it tough for him to get comfortable. Garcia didn’t look good in the fight, but him hanging in there and not getting stopped was a testament to his toughness and refusal to quit. Garcia is a 32-year-old American who stands at 5’6”, has a 68 inch reach and an orthodox stance. Despite the result, Garcia is still one of the better welterweights in the world with a high IQ, above average conditioning and one of the better jabs in the division. Garcia has become a much cleaner boxer these last couple of years in terms of how he puts his punches together and taking each of his last four fights to decisions have shown he’s a more complete boxer rather than somebody who relies on those power punches the way he did earlier in his career. Garcia should be just fine moving forward. This will be Garcia’s 10th career fight in Texas.

Jessie Vargas enters this fight with a 29-2-2 record that includes 11 knockouts. Vargas has split last eight fights and is coming off a April win over Humberto Soto. After hit or miss results the last few years, Vargas showed great toughness in his last bout, overcoming a cut due to a clash of heads and eventually getting the knockout in the sixth round. Vargas now looks to win back-to-back fights for the first time since 2014 while getting the biggest win of his career. Vargas is 30 years old, stands at 5’11”, has a 71-inch reach and an orthodox stance. Vargas is a fearless pressure fighter who never stops coming forward and throwing combinations. Vargas has a dangerous right hook that can drop most fighters in this division if landed cleanly, and he has highly impressive footwork. Vargas is also solid defensively with great head movement and always bobbing and weaving his way out of traffic. After being on the short end in so many big fights, a win here finally gives Vargas the respect he deserves. This will be Vargas’ first career fight in Texas.

Let’s just cut to the chase and say that these odds are rather surprising. Sure, Garcia is the bigger name and more accomplished, but he’s also somebody adjusting to a new weight class and coming off his first career loss. Garcia’s loss was also overwhelmingly one-sided, the type of result that could have shot his confidence. Vargas is a pitbull in the ring who pressures nonstop and goes for the kill when he has a chance. If Garcia isn’t 100 percent feeling it or still isn’t comfortable at this new weight, he’s going to lose again. Vargas is a live dog in this fight and is going to have a chance no matter if Garcia made improvements or not.

I’ll gladly take Vargas and these odds in what some would consider a big upset.