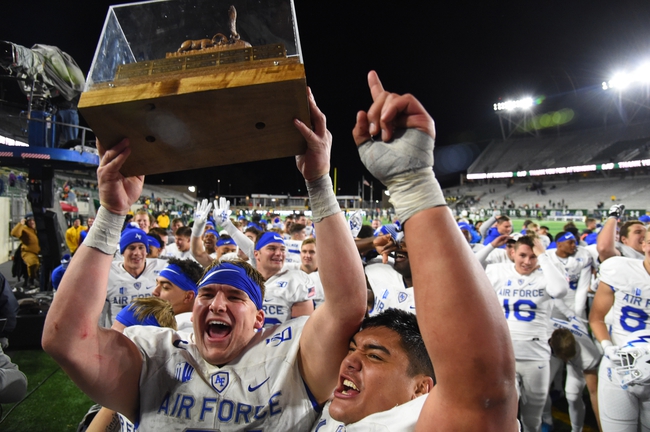 The Wyoming Cowboys travel to Falcon stadium to take on the Air Force Falcons. Wyoming improved to 7-4 on the season after defeating Colorado State 17-7. In a defensive battle, Wyoming allowed only 48 rushing yards and held Colorado State 5-12 on third downs.

The Wyoming offense struggled to move the ball through the air mustering only 81 yards but was able to run the ball for 192 yards and do just enough to get the win. Sophomore running back Xazavian Valladay has led the way for the Cowboys this season and this game was no different totaling 154 rush yards and averaging 5.7 yards per carry against Colorado State.

Air Force was able to go on the road against New Mexico last week and pull off a decisive 44-22 victory to improve to 9-2 on the season. Air Force uses the always diverse triple option attack, however last week showed they could throw the ball well. Junior quarterback Donald Hammond III throwing the ball successfully, going 9/10 for 327 yards and 4 touchdowns in the air. The dual threat quarterback added 41 yards and another touchdown on the ground.

Air Force is second in the nation in rushing yards per game and third in the nation in rushing yards per game this season, Wyoming is capable of stopping the run ranking 7th in run defense allowing 93.7 yards per game. In recent history, Wyoming has been very good against Air Force winning 5 of the last 6 outright. While going an unheard of 10-0 ATS in their last ten matchups. Wyoming understands how to stop Air Force’s versatile rushing attack and will be able to keep this game close to the end. Final Score Prediction, Air Force Falcons win, but fail to cover 31-24