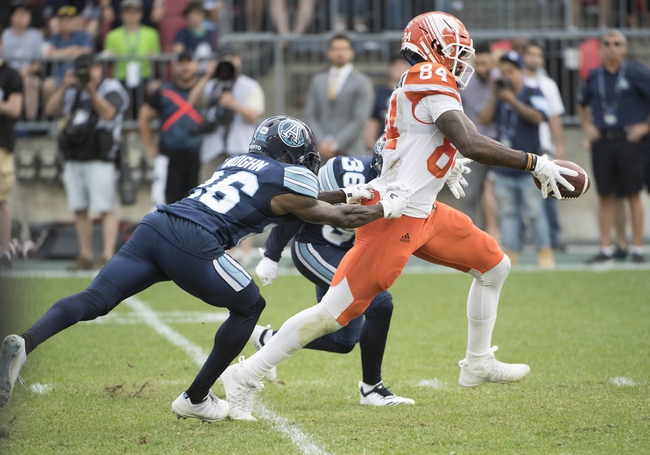 Hamilton Tiger-Cats at BC Lions

The Hamilton Tiger-Cats and BC Lions meet Saturday in CFL action at the BC Place.

The Hamilton Tiger-Cats look to stay hot after winning four of their last five games. The Hamilton Tiger-Cats have split their last four road games. Jeremiah Masoli is completing 71.4 percent of his passes for 1,576 yards, nine touchdowns and seven interceptions. Masoli has at least one touchdown pass in 17 of his last 20 games. Brandon Banks and Bralon Addison have combined for 1,228 receiving yards and eight touchdowns while Jaelon Acklin has 23 receptions. The Hamilton Tiger-Cats ground game is averaging 93.6 yards per contest, and Sean Thomas Erlington leads the way with 224 yards on 33 carries. Defensively, Hamilton is allowing 20 points and 388.3 yards per game. Justin Tuggle leads the Tiger-Cats with 44 tackles, Ja'Gared Davis has six sacks and Jumal Rolle has two interceptions.

The BC Lions need a win here in order to snap a five-game losing streak. The BC Lions have lost all three home games this season. Mike Reilly is completing 66.4 percent of his passes for 2,151 yards, eight touchdowns and nine interceptions. Reilly has at least one touchdown pass in 22 of his last 27 games. Bryan Burnham and Lemar Durant have combined for 1,218 receiving yards and six touchdowns while Duron Carter has 37 receptions. The BC Lions ground game is averaging 84 yards per contest, and John White leads the way with 506 yards and five touchdowns. Defensively, BC is allowing 34.2 points and 363 yards per game. Maleki Harris leads the BC Lions with 39 tackles, Odell Willis has two sacks and Aaron Grymes has one interception.

The Hamilton Tiger-Cats have already won four of the last five meetings against BC, and it's safe to say this is the best Hamilton team we've seen in a while. Hamilton wins on the road by an average of 13 points and is averaging 41 points per game in its last three contests against BC. The BC Lions are just 2-7 ATS this season and 0-3 ATS at home. In its last three games, BC is losing by an average of 21.3 points. The Hamilton Tiger-Cats and the reasonable chalk almost seems too easy here.

The pick in this article is the opinion of the writer, not a Sports Chat Place site consensus.
Previous Pick
Saskatchewan Roughriders vs. Ottawa Redblacks CFL Pick, Odds, Prediction - 8/24/19
Next Pick
Hawaii vs. Arizona - 8/24/19 College Football Pick, Odds, and Prediction