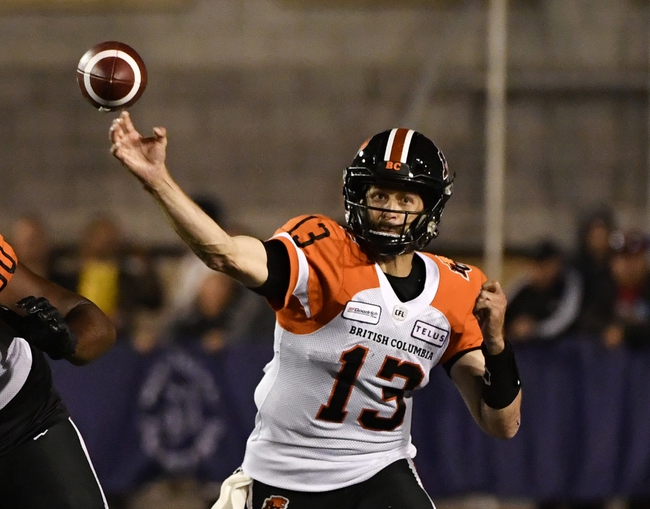 BC Lions vs. Calgary Stampeders

The Calgary Stampeders are set to visit BC Place Stadium in Vancouver, Canada for a Week 21 clash against the BC Lions. The Calgary Stampeders come into this matchup with an 11-6 record, and they will be looking to rebound after dropping their recent road game against the Winnipeg Blue Bombers, 29-28. QB Bo Levi Mitchell had a huge game through the air for Calgary as he connected on 31 of his 43 pass attempts for 350 yards and 4 TDs. The WRs had huge games for the Stampeders as Hergy Mayala hauled in 7 catches for 83 yards and 2 TDs while Eric Rogers pitched in 7 catches for 78 yards and 2 TDs.

The Calgary Stampeders struggled on the defensive side of the ball against the Winnipeg Blue Bombers as they allowed them to score 29 points and rack up a total of 315 yards of offense. DB Brandon Smith led the way for the Calgary defense with 9 tackles. LB Nate Holley was able to have a productive game for the Stampeders as he contributed 5 tackles while hauling in the lone interception for the unit.

The BC Lions come into this matchup with a 5-12 record, and they will be looking to rebound after dropping their recent home game against the Saskatchewan Roughriders, 27-19. QB Danny O’Brien struggled to get much offense generated through the air for BC as he connected on 16 of his 25 pass attempts for 171 yards, 1 TD, and 1 interception. WR Bryan Burnham was the top target for O’Brien and the Lions as he hauled in 3 catches for 72 yards and a TD.

The BC Lions struggled on the defensive side of the ball against the Saskatchewan Roughriders as they allowed them to score 27 points and rack up a total of 355 yards of offense. DB Brandon Dozier led the way for the BC defense as he racked up 7 tackles. LB Kevin Haynes had a productive game for the Lions as he contributed 6 tackles and the lone sack of the game. DB Crezdon Butler had a solid game from the secondary with 4 tackles and a recovered fumble.

The BC Lions have struggled a ton against the West division as they are 0-9, and things won’t improve against the Stampeders as they have the 2nd best scoring defense in the CFL. The Stampeders looked good on the offensive side of the ball against Winnipeg, and Bo Levi Mitchell should be able to resemble that same success against the Lions. Calgary is holding their opponents to an average of 6.4 PPG while BC ranks towards the bottom of the CFL in points scored which could be due to having a handful of backup QBs start games this season. BC will have Danny O’Brien under center once again, and he has struggled to get any offense generated in 5 games (1 TD to 2 INTs). Take Calgary to win big on the road.