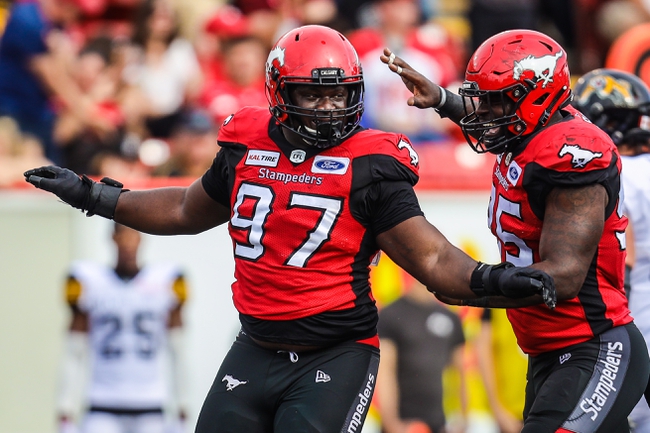 The Saskatchewan Roughriders are set to visit McMahon Stadium in Calgary, Canada for a Week 18 clash against the Calgary Stampeders. The Saskatchewan Roughriders come into this matchup with a 10-4 record, and they will be looking to continue their success after winning their recent home game against the Winnipeg Blue Bombers, 21-6. QB Cody Fajardo had a big game through the air for the Roughriders as he connected on 18 of his 28 pass attempts for 300 yards and 1 TD. WR Shaq Evans was the top target for Fajardo and Saskatchewan as he hauled in 7 catches for 193 yards and a TD.

The Saskatchewan Roughriders were very good on the defensive side of the ball against the Winnipeg Blue Bombers as they held them to 6 points while forcing 3 turnovers. LB Solomon Elimimian led the way for the Saskatchewan defense with 8 tackles. The secondary had a productive game for the Roughriders as L.J. McCray recorded 7 tackles and an interception while Ed Gainey hauled in an interception as well.

The Calgary Stampeders come into matchup with a 9-5 record, and they will be looking to rebound after dropping their recent road game against the Montreal Alouettes, 21-17. QB Bo Levi Mitchell had a productive game through the air for the Stampeders as he connected on 31 of his 43 pass attempts for 464 yards, 1 TD, and 1 interception. WR Josh Huff was the top target for Mitchell and Calgary as he hauled in 9 catches for 149 yards and a TD.

The Calgary Stampeders were solid on the defensive side of the ball against the Montreal Alouettes as they held them to 21 points and a total of 293 yards of offense. LB Wynton McManis led the way for the Calgary defense with 8 tackles while his LB partner Nate Holley pitched in 8 tackles as well. DL Cordarro Law was able to get into the Montreal backfield and contribute the lone sack of the game for the Stampeders.

The Calgary Stampeders were able to beat the Roughriders in their only clash this season, but Saskatchewan is playing some of their best football as of recent as they have won 9 of their last 10 games. A huge reason for the success of Saskatchewan has been their high level of QB play as Cody Fajardo has not only made an impact through the air, but he has shown the ability to make plays with his legs. The Stampeders will look to air the ball out as they have a capable QB in Bo Levi Mitchell, but Saskatchewan is coming off a game where they came down with 2 interceptions which shows their defensive abilities. I expect the Roughriders to even the series out with the Stampeders with a road win.