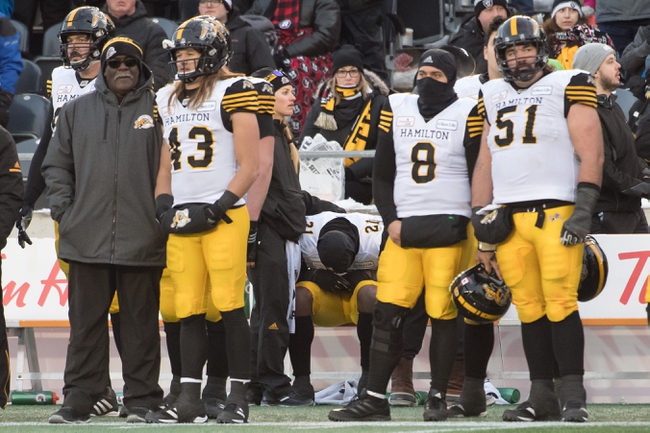 BC Lions at Hamilton Tiger-Cats

The BC Lions could use a victory here to snap a three-game losing streak. The BC Lions have lost three of their last four road games. Mike Reilly is completing 66.5 percent of his passes for 1,668 yards, six touchdowns and six interceptions. Reilly has at least one touchdown pass in 21 of his last 25 games. Bryan Burnham and Lemar Durant have combined for 826 receiving yards and four touchdowns while Duron Carter has 32 receptions. The BC Lions ground game is averaging 76.9 yards per contest, and John White leads the way with 329 yards and two touchdowns. Defensively, BC is allowing 34.4 points and 372.9 yards per game. Jordan Herdman-Reed leads the BC Lions with 37 tackles, Davon Coleman has two sacks and Aaron Grymes has one interception.

The Hamilton Tiger-Cats look for win after splitting their last four games. The Hamilton Tiger-Cats have won all four home games this season. Jeremiah Masoli is completing 71.4 percent of his passes for 1,576 yards, nine touchdowns and seven interceptions. Masoli has at least one touchdown pass in 17 of his last 20 games. Brandon Banks and Bralon Addison have combined for 920 receiving yards and six touchdowns while Jaelon Acklin has 17 receptions. The Hamilton Tiger-Cats ground game is averaging 87.6 yards per contest, and Sean Thomas Erlington leads the way with 224 yards on 33 carries. Defensively, Hamilton is allowing 19.9 points and 385.7 yards per game. Justin Tuggle leads the Tiger-Cats with 31 tackles, Ja'Gared Davis has four sacks and Jumal Rolle has two interceptions.