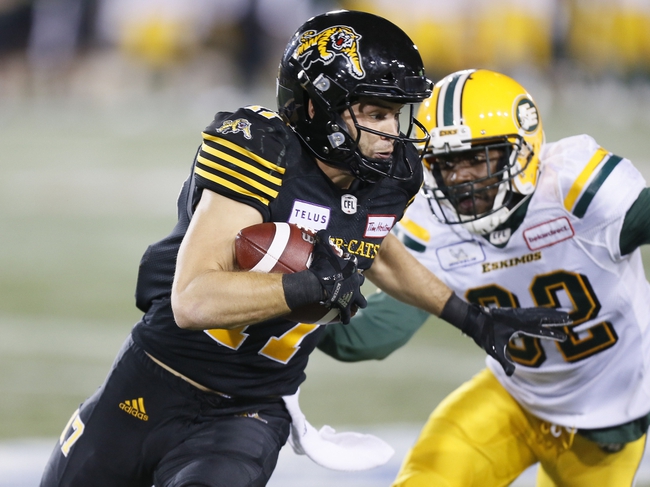 The Edmonton Eskimos play on the road Friday against the Hamilton Tiger-Cats in a CFL clash. The Eskimos beat the Ottawa RedBlacks 21-16 on Saturday. Tevaun Smith had just one reception in the game but it was for a touchdown that put the Eskimos ahead for good and improved Edmonton’s record to 7-7. Logan Kilgore has 223 yards passing in Edmonton’s 5-point win.

Logan Kilgore leads Edmonton with 688 yards passing, 3 touchdowns and four interceptions. C.J. Gable has 950 yards rushing and two touchdowns to lead the Eskimos. Ricky Collins leads in receiving with 65 catches for 925 yards and three touchdowns, while Greg Ellingson has 69 pass receptions for 921 yards and five touchdowns.

Hamilton beat the Winnipeg Blue Bombers in a matchup of first place teams 33-13 in their most recent outing. The Tiger-Cats gradually pulled away from the Blue Bombers during the second half. Hamilton is now 11-3 on the season and was the first team to beat Winnipeg at home this season. Quarterback Dane Evans passed for 359 yards with three touchdowns and just one interception. Brandon Banks led the receiving corps with 113 yards and a touchdown.

Dane Evans has passed for 2,646 yards, 14 touchdowns and 11 interceptions for Hamilton. The leading rusher for the Tiger-Cats is Sean Thomas Erlington with 224 yards. Brandon Banks leads the team in receiving with 1,152 yards and eight touchdown receptions, while Bralon Addison has caught passes for 1,070 yards and seven TD receptions.

The UNDER has cashed in 7 of Hamilton’s last 10

This season Hamilton has had much more success than Edmonton. The Tiger-Cats are 11-3 while the Eskimos are battling for a playoff berth at 7-7. Hamilton has covered the spread in 4 (4-0-2) of its last 6 overall. The Tiger-Cats have covered 5 of their last 7 playing at home. Hamilton defeated Edmonton 30-27 on September 20 covering the nut as 1.5-point road chalk. Final Score Prediction, Hamilton Tiger-Cats win and cover ATS 34-20