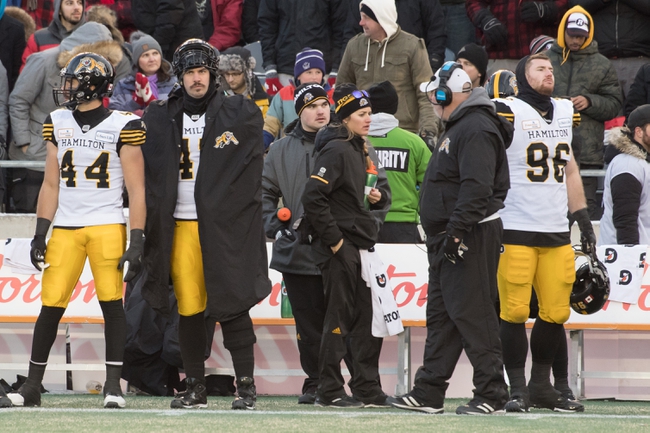 The Toronto Argonauts could use a win to rebound from a rough 1-8 record. The Toronto Argonauts have lost all four road games this season. McLeod Bethel-Thompson is completing 68.5 percent of his passes for 2,256 yards, 14 touchdowns and nine interceptions. Bethel-Thompson has two or more touchdown passes in five of his last six games. Derel Walker and Armanti Edwards have combined for 1,109 receiving yards and six touchdowns while SJ Green has 41 receptions. The Toronto Argonauts ground game is averaging 75.4 yards per contest, and Brandon Burks leads the way with 204 yards and on 34 carries. Defensively, Toronto is allowing 34.4 points and 442.4 yards per game. Micah Awe leads the Toronto Argonauts with 41 tackles, Cleyon Laing has four sacks and Alden Darby has two interceptions.

The Hamilton Tiger-Cats look to stay hot after winning five of their last six games. The Hamilton Tiger-Cats have won all five home games this season. Jeremiah Masoli is completing 71.4 percent of his passes for 1,576 yards, nine touchdowns and seven interceptions. Masoli and Dane Evans have combined for 2,725 passing yards and 14 touchdowns. Brandon Banks and Bralon Addison have combined for 1,326 receiving yards and eight touchdowns while Jaelon Acklin has 29 receptions. The Hamilton Tiger-Cats ground game is averaging 93.4 yards per contest, and Sean Thomas Erlington leads the way with 224 yards on 33 carries. Defensively, Hamilton is allowing 19 points and 388.8 yards per game. Justin Tuggle leads the Tiger-Cats with 50 tackles, Ja'Gared Davis has eight sacks and Jumal Rolle has two interceptions.

This line may feel steep, but the Toronto Argonauts have gotten thumped more times than not this season where they lose by an average of 17.6 points. The Hamilton Tiger-Cats also already beat Toronto this season 64-14 in the second week of the season on the road. The Tiger-Cats also win at home by an average of 10.6 points and are an impressive 6-3-1 ATS overall and 4-1 ATS at home. I'm always iffy laying double-digit chalk in this league, but the numbers indicate comfortable victory for Hamilton at home.

The pick in this article is the opinion of the writer, not a Sports Chat Place site consensus.
Previous Pick
Oklahoma vs. Houston - 9/1/19 College Football Pick, Odds, and Prediction
Next Pick
Calgary Stampeders vs. Edmonton Eskimos CFL Pick, Odds, Prediction - 9/2/19