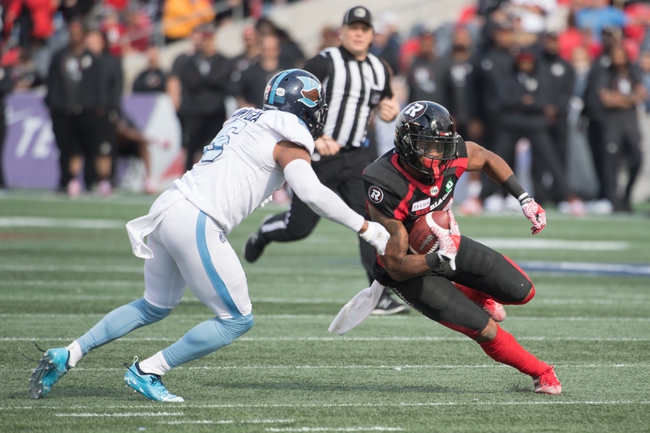 On Friday, the Ottawa RedBlacks visit the Toronto Argonauts in a Week 18 CFL showdown. The RedBlacks had a bye this past weekend and lost to the Edmonton Eskimos 21-16 in their most recent outing. Dominique Davis played the most at quarterback for Ottawa with 215 yards passing but was injured during the fourth quarter. Anthony Cioffi had six tackles for Ottawa. With the loss, Ottawa slipped to 3-11 on the season.

Toronto lost to the BC Lions on Saturday 55-8. The Argonauts never led in the lopsided loss. James Franklin’s first pass was deflected into the hands of TJ Lee for the Lions and everything went downhill after that. Franklin threw for just 32 yards through the third quarter before being replaced by McLeod Bethel-Thompson. Toronto scored in the final meeting on a touchdown pass to Armanti Edwards from Bethel-Thompson.

McLeod Bethel-Thompson leads Toronto with 3,184 yards passing, 20 touchdowns and 12 interceptions. James Wilder Jr. has 323 yards rushing and one touchdown to lead the Argonauts. Derel Walker leads Toronto in receiving with 1,016 yards and six touchdowns, while S.J. Green has 727 yards receiving and three touchdowns.

The OVER has cashed in 4 of the Argonauts last 5

Both teams are having poor seasons. The RedBlacks are officially out of playoff contention while the Argonauts have an outside chance of reaching the postseason. The RedBlacks have failed to cover the number in 5 of the last 6 overall and 5 of the last 6 against an opponent with a losing record. Toronto has covered the number in 4 of its last 5 following a loss ATS. Final Score Prediction, Toronto Argonauts win and cover ATS 27-23