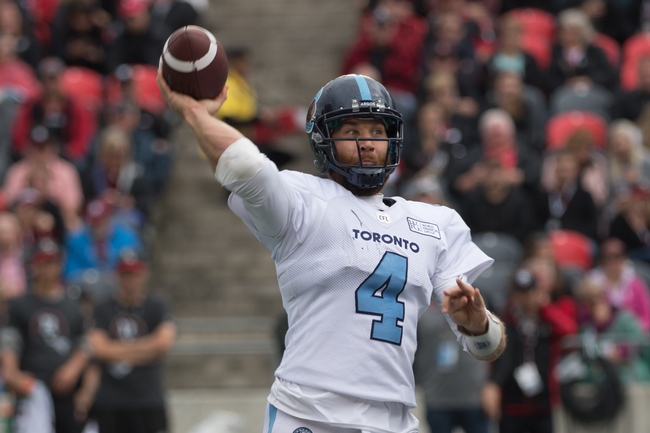 The Ottawa RedBlacks are set to visit BMO Field in Toronto, Canada for a Week 20 clash against the Toronto Argonauts. The Ottawa RedBlacks come into this matchup with a 3-13 record, and they will be looking to rebound after dropping their recent road game against the Hamilton Tiger-Cats. QB Will Arndt struggled to get much offense generated through the air for Ottawa as he connected on 17 of his 30 pass attempts for 112 yards. RB Brendan Gillanders had a productive game on the ground for the RedBlacks as he ran for 50 yards on 8 carries.

The Ottawa RedBlacks struggled on the defensive side of the ball against the Hamilton Tiger-Cats as they allowed them to score 33 points and rack up a total of 548 yards of offense. DB Randall Evans led the way for the Ottawa defense as he contributed 8 tackles. The secondary had a productive game for the RedBlacks as De’Chavon Hayes contributed 5 tackles and an interception. Avery Ellis, J.R. Tavai, and Anthony Cioffi were able to record sacks for the unit.

The Toronto Argonauts come into this matchup with a 3-13 record, and they will be looking to rebound after dropping their recent road game against the Montreal Alouettes, 27-24. QB McLeod Bethel-Thompson had a big game through the air for Toronto as he connected on 35 of his 45 pass attempts for 342 yards and 2 TDs. WR Chandler Worthy was the top target for Bethel-Thompson and the Argonauts as he hauled in 9 catches for 93 yards and a TD.

The Toronto Argonauts struggled on the defensive side of the ball against the Montreal Alouettes as they allowed them to score 27 points and rack up a total of 385 yards of offense. LB Kennan Gilchrist led the way for the Toronto defense as he recorded 7 tackles. The kicking game suffered for the Argonauts as their kicker Tyler Crapigna went 1 for 3 in field goals. The Toronto Argonauts were unable to record a turnover which is a recipe for losing.

Both of these teams currently sit at the bottom of the CFL, but the Toronto Argonauts dominated the RedBlacks by 29 points on the road in their only meeting this season. Toronto has one of the best QBs in the league with McLeod Bethel-Thompson as he has thrown for 24 TDs compared to 13 interceptions while the Ottawa RedBlacks have not had similar success at that position. The RedBlacks have the worst offense in the league as they are only scoring 14 PPG, and it will be hard for them to go on the road and turn things around.