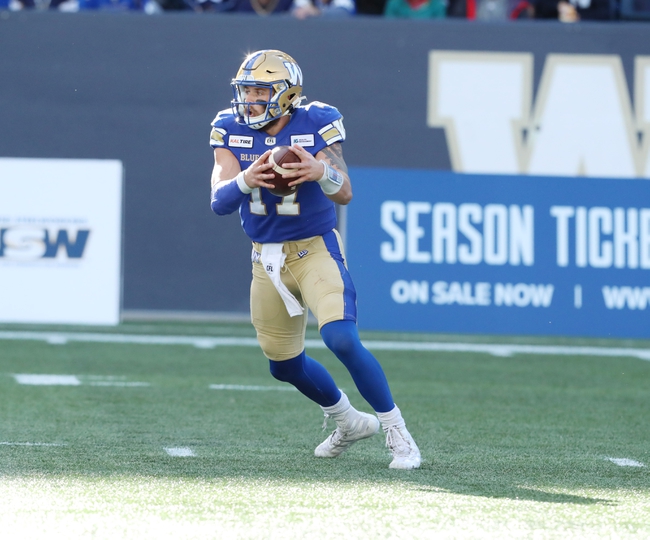 The Montreal Alouettes are set to visit IG Field in Winnipeg, Canada for a Week 18 clash against the Winnipeg Blue Bombers. The Montreal Alouettes come into this matchup with an 8-6 record, and they will be looking to continue their success after winning their recent home game against the Calgary Stampeders, 21-17. QB Vernon Adams Jr. was limited through the air as he connected on 18 of his 29 pass attempts for 206 yards, but he was able to add a rushing TD. WR Eugene Lewis was able to have a solid game as he hauled in 4 catches for a team-high 86 yards.

The Montreal Alouettes were solid on the defensive side of the ball against the Calgary Stampeders as they held them to 17 points while forcing 4 turnovers. LB Bo Lokombo led the way for the Montreal defense with 10 tackles. The defensive line had a productive game for the Alouettes as DE John Bowman and DL Antonio Simmons were able to record the lone sacks of the game while DT Ryan Brown came down with an interception.

The Winnipeg Blue Bombers come into this matchup with a 9-6 record, and they will be looking to rebound after dropping their recent road game against the Saskatchewan Roughriders, 21-6. QB Chris Streveler struggled to find any consistency through the air for the Blue Bombers as he connected on 26 of his 40 pass attempts for 254 yards and 2 interceptions. WR Darvin Adams was the top target for Streveler and the Blue Bombers as he hauled in 8 catches for 109 yards.

The Winnipeg Blue Bombers struggled on the defensive side of the ball as they allowed the Saskatchewan Roughriders to score 21 points and rack up a total of 370 yards of offense. LB Kyrie Wilson led the way for the Winnipeg defense with 6 tackles and 1 sack. DT Jake Thomas and DE Jackson Jeffcoat were able to get into the Saskatchewan backfield a handful of times as they both contributed sacks.

The Montreal Alouettes edged out the lone meeting between these two teams on September 21st, and I think we will once again see a close game. The Montreal Alouettes currently have one of the best offenses in the CFL as they rank 2nd in points per game with 23.9 PPG, and a huge reason for their success RB William Stanback totaling 954 yards and 5 TDs while Vernon Adams Jr. is keeping defenses honest with his dual-threat capabilities. The Blue Bombers have dropped 4 of their last 5 games, and I think they will continue to struggle against a high-powered offense.