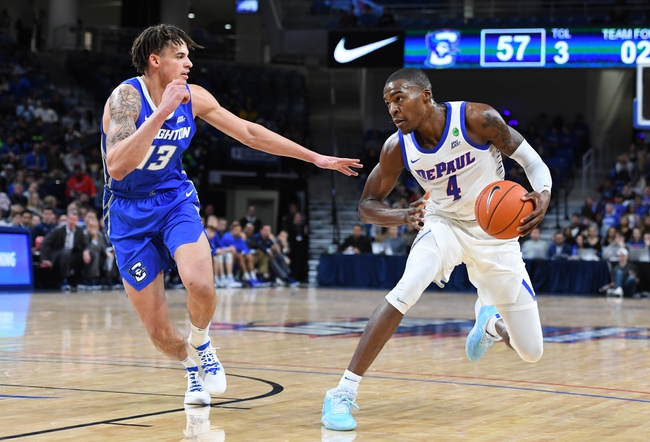 The DePaul Blue Demons are in dire need of confidence wins down the stretch, currently sitting in the basement of the Big East with a 1-10 conference mark after a 6th straight defeat coming in the form of a 76-72 loss to Georgetown last time out. Charlie Moore leads DePaul in scoring and assists with 15.9 points and 6.8 assists per game while Paul Reed is right behind in 2nd with 15.6 points and a team-high 10.9 rebounds per game. Jalen Coleman-Lands is averaging 12.2 points and Jaylen Butz is contributing 10.8 points per game to the cause this season. As a team, DePaul is averaging 72.9 points per game on 44.5% shooting from the field, 31.8% from behind the arc and 69.4% from the foul line while allowing opposing teams to average 69 points on 39.7% shooting from the floor and 31.6% from behind the 3-point line this season. DePaul is 4-5 straight up and 6-3 against the spread on the road this season.

The Creighton Bluejays will try to chase down Seton Hall for the top spot in the conference, sitting in a tie for 2nd at 8-4 in conference play after an 87-82 win over the Pirates last time out. Ty-Shon Alexander leads Creighton in scoring with 16.4 points per game while Marcus Zegarowski is 2nd in scoring and tops in assists with 16 points and 5.2 assists per game. Denzel Mahoney is averaging 12.8 points while Mitch Ballock is chipping in 12.3 points per game to round out the group of double-digit scorers for Creighton this year. Christian Bishop is also contributing 8.6 points and a team-high 5.6 rebounds per game. As a team, Creighton is averaging 77.7 points on 46.6% shooting from the field, 37.3% from behind the arc and 73.6% from the foul line while allowing opposing teams to average 69.9 points on 41.7% shooting from the field and 30% from behind the 3-point line this season. Creighton is 13-1 straight up and 7-6 against the spread at home this season.

Head-to-head, the favorite is 8-3 ATS in the last 11 meetings between these two teams.

The points with DePaul are tempting as the Blue Demons still have a lot of talent and their last five road games have all been decided by seven points or less. However, Creighton will be a little bit ticked off after letting a big chance against Seton Hall slip away last time out, and the Bluejays can shoot the lights out at home. I just worry that the Bluejays will pull away as the game goes on that that DePaul won’t be able to go shot for shot when called upon, so I’ll lay the points with Creighton at home here.