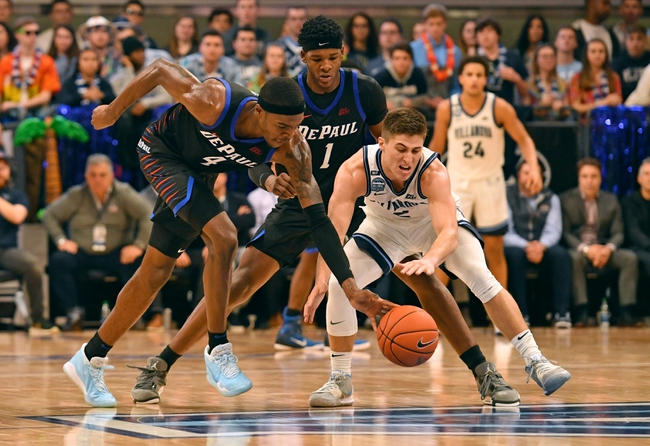 The Villanova Wildcats and the DePaul Blue Demons meet in Big East conference college basketball action from the Wintrust Arena on Wednesday night.

The Villanova Wildcats will look to climb some ranks in the Big East table, sitting at 8-4 in conference play after a 76-56 win over Temple last time out. Collin Gillespie leads the Wildcats in scoring and assists with 16.2 PPG and 4.6 APG while Saddiq Bey is 2nd in scoring with 15.4 PPG and Jeremiah Robinson-Earl is 3rd in scoring and tops in rebounding with 11 PPG and 9.5 RPG this season. Jermaine Samuels and Justin Moore each have 10+ PPG this season as well for ‘Nova. As a team, Villanova is averaging 73.6 points on 43.8% shooting from the field, 35.7% from behind the 3-point line and 77.5% from the foul line while allowing 66.7 points on 43.6% shooting from the field and 31.8% from behind the arc this season. Villanova is 5-3 straight up and 4-3-1 against the spread on the road this season.

The DePaul Blue Demons could use a win to try to get out of the basement to the Big East, sitting at 1-11 in conference play after a 7th straight loss in the form of a 93-64 loss to Creighton last time out. Charlie Moore leads the Blue Demons in scoring and assists with 16.1 PPG and 6.7 APG while Paul Reed is 2nd in scoring and tops in rebounding, averaging a double-double per game with 15.1 PPG and 10.6 RPG this season. Jalen Coleman-Lands is averaging 12 PPG and Jaylen Butz is adding 10.4 PPG this season. As a team, DePaul is averaging 72.5 points on 44.5% shooting from the field, 32.3% from 3-point range and 64.8% from the foul line while allowing 70 points on 40.5% shooting from the field and 32.3% from 3-point range this season. DePaul is 9-6 straight up and 6-8 against the spread at home this season.

Head-to-head, the road team is 10-2 ATS in the last 12 meetings between these two teams.

I’d be lying if I said that the fact that we’re laying such a small number with Villanova didn’t make me feel suspicious, but I’m still siding with Villanova here. The Wildcats are simply the better team that are starting to pick up steam at the right time while DePaul just can’t buy a win to save their lives and just appear to be running out of gas down the stretch. I just think this is a game that plays to form, so I’ll lay the points with Villanova on the road here.