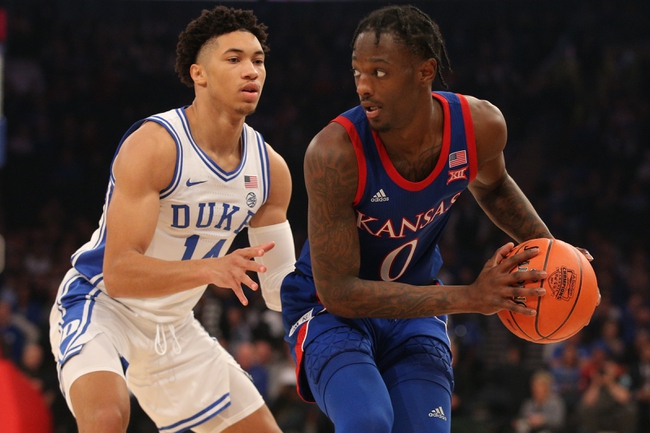 The UNC Greensboro Spartans travel to Allen Fieldhouse for a matchup with the Kansas Jayhawks. The Spartans are (1-0) on the season after blowing out North Carolina A&T Aggies, 83-50.  The Jayhawks (0-1) opened the season in the State Farm Champions Classic and left with a loss to the Duke Blue Devils, 68-66.

Kansas opened the season with a loss to Duke, just the second time the Jayhawks have started 0-1 in the Bill Self era.  Devon Dotson led the way for Kansas, scoring 17 points and snagging 2 rebounds.  David McCormack added 6 points but was great on the boards, pulling down 13 rebounds.  The Jayhawks shot 46% from the floor for the game.  The Jayhawks hurt their chance by committing 28 turnovers, compared to the Blue Devils 16 turnovers.  Kansas led by 9 points in the game.

Spartans are 5-1 ATS in their last 7 Friday games.

Spartans are 1-4 ATS in their last 5 road games.

The under is 4-1 in Spartans last 5 overall.

Jayhawks are 1-4 ATS in their last 5 vs. the Southern Conf.

The Jayhawks are 1-0 head to head against the Spartans.  Kansas lost their first game and one can only bet the Jayhawks will come out firing on all cylinders.  The Spartans won a program best 29 games a year ago and were one of the teams left out of an at large bid to the NCAA Tournament.  The Spartans are not the same as last year, having lost 2 key starters.  If the Spartans are going to want to compete, they will need a big game from Isaiah Miller.  While the Spartans have a good program, it's just a shame that they are the first team on the Jayhawks schedule following a loss to Duke.  Final score prediction, Kansas will win and cover 83-65.