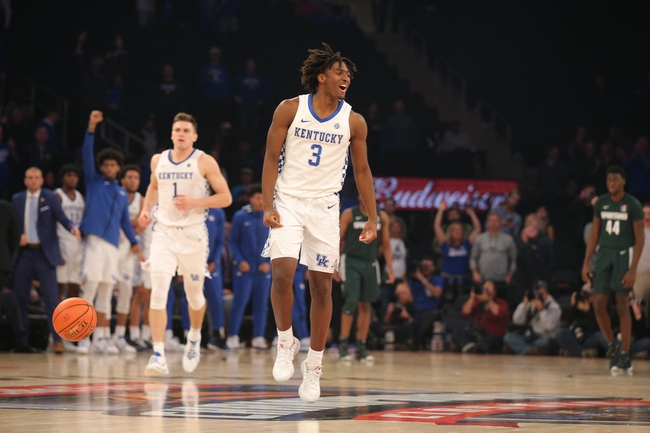 Eastern Kentucky is heading into the game to face the team that should be number 1 in the nation after this week in Kentucky. In the opening game the Colonels were able to beat Chattanooga by a score of 79-68. Now, the Colonels are hoping to continue to have that high level of offensive production in this game here as well.

In the opening game Houston King went 6/8 from the floor and 3/5 from the line for 19 points. Darius Hicks managed to pull down a total of 12 rebounds in the game, 2 of which were on the offensive glass. Russhard Cruickshank managed to get a total of 4 assist, but turned the ball over 4 times.

Kentucky is heading into the game here after pulling off the win over Michigan State on the opening night of the season. However, the Wildcats did not break the 70 point mark in the game and the defense showed up to take down the Spartans. No matter what, the impressive defense of UK could be one that can lead to UK getting quite a few wins this season.

Tyrese Maxey ended up going 7/12 from the field and 9/10 from the line for a total of 26 points. Nate Sestina ended up getting 6 rebounds for the Wildcats in the game and the lack of rebounding production could be a concern down the road. Ashton Hagans ended up getting a total of 3 assist, but turned the ball over 3 times as well.

The Wildcats have a great defense that was able to shut down a high powered Michigan State offense. The Colonels offense is quite a bit weaker than the Spartans and that makes it easier for the Wildcats to shut them down and bring home the win. Final Score Prediction, UK Wildcats win but fail to cover 76-62.