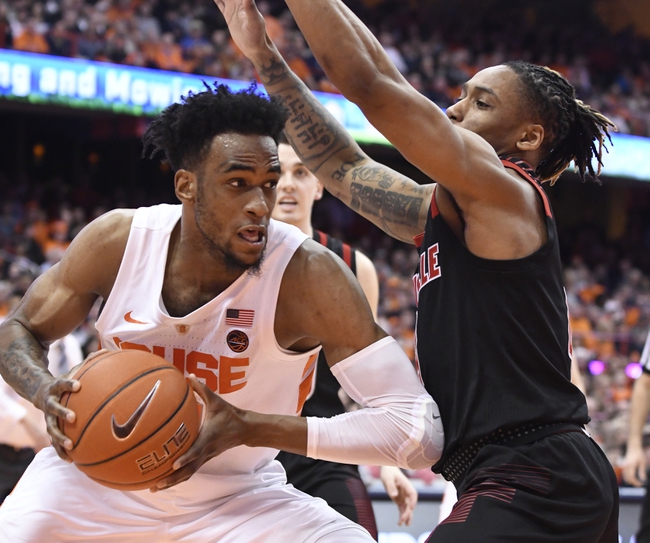 The Syracuse Orange and the Louisville Cardinals meet in ACC college basketball action from the KFC Yum! Center on Wednesday night.

The Syracuse Orange will look to get out of a logjam in the middle of the ACC, sitting at 7-7 in conference play after losing 4 of their last 5 games following an 80-77 loss to Florida State last time out. Elijah Hughes leads the Orange in scoring and assists with 18.9 points and 3.7 assists per game while Buddy Boeheim is 2nd with 15.6 PPG and Joseph Girard III is 3rd with 13 PPG. Marek Dolezaj is 4th in scoring and tops in rebounding with 10.4 points and 6.8 rebounds per game this season. As a team, Syracuse is averaging 74.1 points on 43.7% shooting from the field, 34% from behind the arc and 74.1% from the foul line while allowing opposing teams to average 68.8 points on 40.4% shooting from the field and 31.3% from the foul line. Syracuse is 4-3 straight up and 6-1 against the spread on the road this season.

The Louisville Cardinals will try to keep pace at the top of the ACC, sitting at 11-3 in conference play despite back-to-back road losses following a 77-62 defeat at Clemson last time out. Jordan Nwora leads the Cardinals in scoring with 18.2 points as well as 7.3 rebounds per game while Steven Enoch is 2nd with 9.9 PPG and Dwayne Sutton is 3rd in scoring and tops in rebounding with 9.2 PPG and 8.4 RPG this season. Lamarr Kimble leads the Cards in assists with 2.8 APG this season. As a team, Louisville is averaging 74.8 points per game on 45.6% shooting from the field, 38.3% from behind the 3-point line and 73.3% from the foul line while allowing opposing teams to average 63.9 points on 38.5% shooting from the field and 30.2% from behind the 3-point line this season. Louisville is 14-1 straight up and 8-7 against the spread at home this season.

Head-to-head, the home team is 5-2 ATS in the last 7 meetings between these two teams.

I get Louisville being favored now that they’re back at home, but I still think this is too many points to be giving up to a Syracuse team that can really stifle you with a zone defense that travels and is able to score with the best of them when called upon. Syracuse is also 6-0 ATS on the road in conference play this season, and the Orange just stepped up against Florida State, taking the Seminoles down to the wire as a 9-point road dog there as well. I’ll take my chances with Syracuse and the points as I see this one being another close game as well.