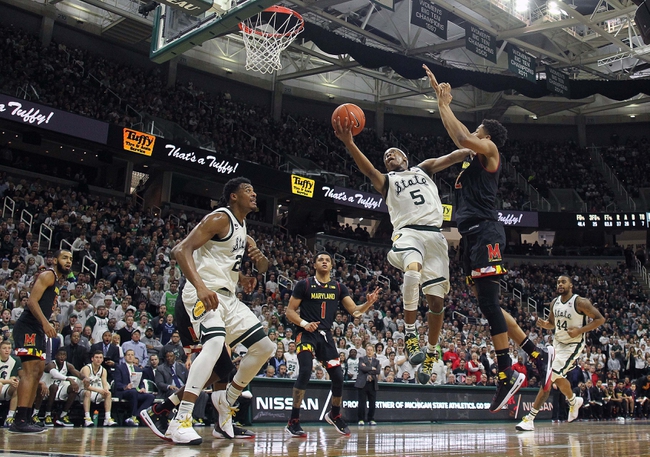 The Maryland Terrapins and the Michigan State Spartans meet in college basketball action from Breslin Center on Saturday.

Maryland comes in here at 20-4 overall. The Terrapins have won their last seven straight, taking out Purdue, Northwestern, Indiana, Iowa, Rutgers, Illinois and Nebraska during that time.

In the win over the Cornhuskers, Maryland’s Jalen Smith doubled up on 16 points with 13 rebounds. Eric Ayala added 16 points, five assists and three rebounds there, Anthony Cowan had 13 points and 10 assists, and Donta Scott had 10 points with 10 boards.

Over on the Michigan State side, they’re 17-8 so far. After a three-game losing streak versus Wisconsin, Penn State and Michigan, the Spartans hung on to beat Illinois in their last outing Tuesday.

In the win over the Illini, Michigan State’s Rocket Watts led the team on 21 points. Xavier Tillman doubled up there on 17 points, 11 rebounds and three assists, and Aaron Henry chipped in 13 points with three boards.

Maryland’s seven-game win streak has been pretty intense. They’ve got three games in that time decided by five points or fewer, including a 72-70 result versus Nebraska and a narrow 77-76 escape versus Indiana. Still, it’s been a strong run for the Terrapins.

Michigan State is certainly capable of pushing Maryland to their limit here, as the Spartans hung around with Penn State 75-70 and posted a nice nail-biter win over Illinois. All things considered, I feel a little better about Michigan State here, but it’ll be close.