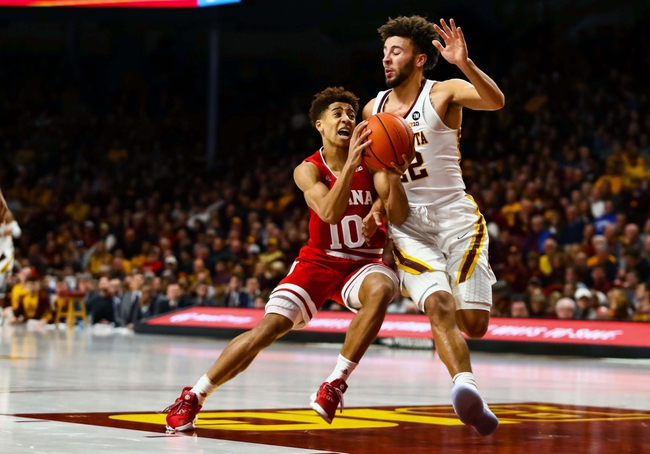 The Indiana Hoosiers and the Minnesota Golden Gophers meet in Big Ten conference college basketball action from the Williams Arena on Wednesday night.

The Indiana Hoosiers come into this game will look to climb some ranks in the Big Ten standings after falling to 6-8 in conference play after an 89-65 loss to Michigan last time out. Trayce Jackson-Davis leads the Hoosiers in scoring and rebounding with 13.6 PPG and 7.7 RPG while Justin Smith has 11 PPG and Davonte Green has 10.5 PPG this season. Rob Phinisee leads the Hoosiers in assists with 3.2 APG this season. As a team, Indiana is averaging 72.7 points on 45.3% shooting from the field, 32.4% from behind the 3-point line and 68.4% from the foul line while allowing opposing teams to averaging 68.2 points on 42.6% shooting from the field and 33.6% from 3-point range this season. Indiana is 1-6 straight up and 1-6 against the spread on the road this season.

The Minnesota Golden Gophers will try to join the fray in the middle of the Big Ten standings, sitting at 6-8 in conference play after a 58-55 loss to Iowa last time out. Daniel Oturu leads the Gophers in scoring and rebounding by averaging a double-double per game with 19.9 PPG and 11.2 RPG this season while Marcus Carr is 2nd in scoring and tops in assists with 15.4 PPG and 6.7 APG this season. Gabe Kalscheur is 3rd in scoring with 11.7 PPG as Minnesota’s last double-digit scorer this season. As a team, Minnesota is averaging 69.8 points on 41.8% shooting from the field, 31.9% from 3-point range and 71.6% from the foul line while allowing 65.9 points on 40.7% shooting from the floor and 32.6% from 3-point range this season. Minnesota is 10-3 straight up and 9-4 against the spread at home this season.

Head-to-head, the underdog is 14-5 ATS in the last 19 meetings between these two teams.

The points with the Hoosiers would be worth a look given how much success the underdog’s had over the years in this matchup. However, home dominance has been the trend in Big Ten conference play this season, and Indiana’s paly on the road has been has been a big part of that as the Hoosiers have lost four of their seven conference road games by double-digits this season. Minnesota stumbled against Iowa, but the Gophers have been pretty tough at home otherwise and I think the Gophers get back to business at home here as the Hoosiers continue to have issues on the road so I’ll lay the points with Minnesota in this one.