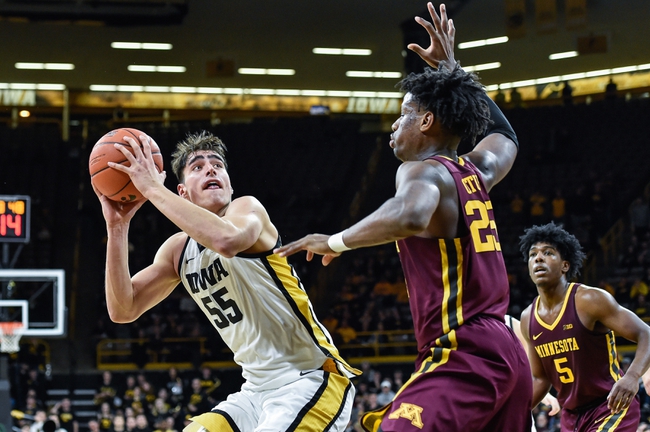 The Iowa Hawkeyes and the Minnesota Golden Gophers meet in Big Ten conference college basketball action from the Williams Arena on Sunday afternoon.

The Iowa Hawkeyes will look to climb a couple of ranks in the Big Ten table after alternating wins and losses in each of their last six games, sitting at 8-6 in conference play after an 89-77 loss to Indiana last time out. Luka Garza leads Iowa in scoring and rebounding with 23.7 points and 9.8 rebounds per game while Joe Wieskamp is 2nd with 15.4 points and 6.1 rebounds and CJ Fredrick is 3rd with 10.7 points per game. Connor McCaffery is also adding a team-high 3.6 assists per game this season. As a team, Iowa is averaging 79 points per game on 45.3% shooting from the field, 35% from behind the arc and 74.8% from the foul line while allowing opposing teams to average 72.4 points on 43.4% shooting from the field and 32.4% from 3-point range. Iowa is 3-5 straight up and 3-5 against the spread on the road this season.

The Minnesota Golden Gophers will look to rebound from an 83-77 loss to Penn State in their last outing to fall to 6-9 in Big Ten conference play. Daniel Oturu leads the Hawkeyes in scoring and rebounding with 20.1 points and 11.5 rebounds per game while Marcus Carr is 2nd in scring with 15.7 points and a team-high 6.7 assists per game. Gabe Kalscheur is Minnesota’s 3rd double-digit scorer with 11.7 points per game this season. As a team, Minnesota is averaging 70.5 points per game on 42% shooting from the field, 32.1% from behind the 3-point line and 72.3% from the foul line while allowing opposing teams to average 66.2 points on 40.7% shooting from the field and 32.7% from behind the arc this season. Minnesota is 10-2 straight up and 9-3 against the spread at home this season.

Head to head, the home team is 5-0 ATS in the last 5 meetings between these two teams.

I’m tempted by free buckets with Iowa, but the problem is that the Hawkeyes losses have all been coming on the road which hasn’t been an uncommon thing in the Big Ten this season, road teams losing in conference play. Minnesota has been rock solid at home this year and it goes without saying when you look at their record that at home is where the Gophers play their best basketball. I just think the Hawkeyes are in deep matchup wise here, and the home court for Minnesota doesn’t help things. I’ll lay the points with Minnesota at home here.