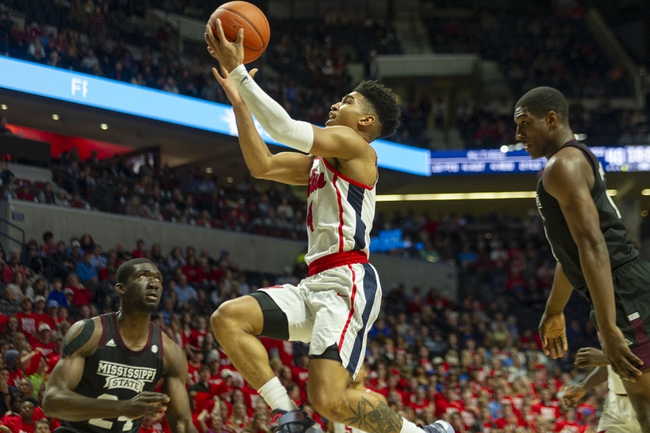 The Ole Miss Rebels and the Missouri Tigers meet in SEC college basketball action from the Mizzou Arena on Tuesday night.

The Ole Miss Rebels will look to climb out of the logjam near the bottom of the SEC, sitting at 4-8 in conference play with a 67-62 loss to Kentucky last time out. Breein Tyree leads the Rebels in scoring with 19.9 points per game while Devontae Shuler is 2nd in scoring and tops in assists with 11.6 points and 3.4 assists per game this season. Blake Hinson has 10.5 points and 5.1 rebounds per game while KJ Buffen has 9.8 points and a team-high 6 rebounds per game. As a team, Ole Miss is averaging 69.4 points on 43.2% shooting from the field, 32.9% from behind the arc and 72.2% from the foul line while allowing opposing teams to average 67 points on 42% shooting from the field and 28.2% from 3-point range this season. Ole Miss is 1-7 straight up and 4-4 against the spread on the road this season.

The Missouri Tigers will look to climb out of the same pack after falling to 4-8 in conference play, alternating wins and losses in each of their last four games following an 85-73 win over Auburn last time out. Dru Smith leads Missouri in scoring and assists with 12.3 points and 4 assists per game while Mark Smith is averaging a team-high 10.9 points and Mitchell Smith has a team-high 4.9 rebounds per game this season. As a team, Missouri is averaging 67.3 poinst on 41.4% shooting from the field, 31.2% from behind the arc and 76.7% from the foul line while allowing opposing teams to average 65.2 points on 40.5% shooting from the field and 28.6% from 3-point range this season.

Head-to-head, the road team is 6-2-2 ATS in the last 10 meetings between these two teams.

I get Missouri being favored here at home, but the problem is that home court hasn’t mattered much between these two teams as the road team’s had the bulk of the success between these two teams and it also doesn’t help that Ole Miss has been a covering machine as of late. I just like the way the Rebels have been playing lately and I think Ole Miss can pick up a rare road win here so I’ll take the free point with the Rebels in this one.