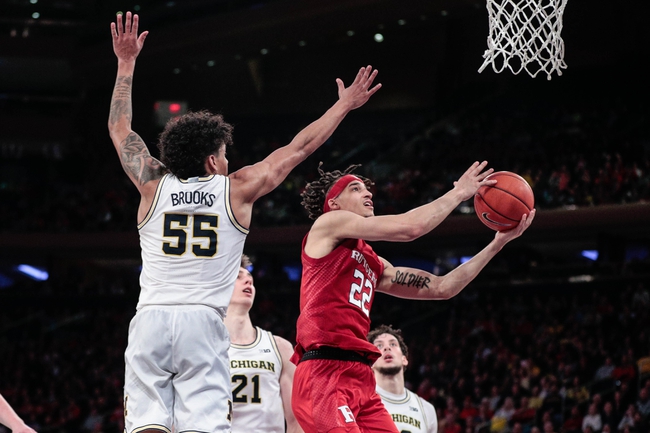 The Michigan Wolverines will try to climb some ranks in the Big Ten standings, sitting at 7-7 in conference play after a 3rd straight win in the form of an 89-65 win over Indiana last time out. Isaiah Livers leads Michigan in scoring with 13.3 PPG while Zavier Simpson is 2nd in scoring and tops in assists with 12.5 PPG and 8.2 APG this season. Jon Teske is averaging 12.3 PPG and a team-high 7.6 RPG while Eli Brooks and Franz Wagner are also averaging double-digits in the scoring column this season. As a team, Michigan is averaging 76.2 points on 46.4% shooting from the field, 35.3% from 3-point range and 72.3% from the foul line while allowing opposing teams to average 68.1 points on 41.9% shooting from the field and 31.1% from 3-point range this season. Michigan is 2-5 straight up and 2-5 against the spread on the road this season.

The Rutgers Scarlet Knights will look to take a step up towards the top of the Big Ten conference, sitting at 9-5 in conference play following a 72-57 win over Illinois last time out. Ron Harper JR. leads Rutgers in scoring with 11.8 PPG while Geo Baker is 2nd in scoring and the leading man in assists with 10.2 PPG and 3.6 APG this season. Akwasi Yeboah is Rutgers’ 3rd and final double-digit scorer this year with 10.1 PPG while Myles Johnson leads the Scarlet Knights on the glass with 8 RPG this season. As a team, Rutgers is averaging 70.5 points on 44.8% shooting from the field, 30.7% from behind the arc and 65.3% from the foul line while allowing opposing teams to average 61.7 points on 37.9% shooting from the floor and 31.6% from behind the arc this season. Rutgers is 17-0 straight up and 11-4-1 against the spread at home this season.

I’m tempted to take a shot with Michigan here as the Wolverines have stepped up their play lately, but the fact here is that there’s something different about this year’s Rutgers team and the Scarlet Knights have been unbeatable at home this season. Rutgers just has a different mojo about them right now and the Scarlet Knights are just playing some solid ball right now and getting them at home in a near pick ‘em is too good for me to pass on. I’ll lay the point with Rutgers at home here.