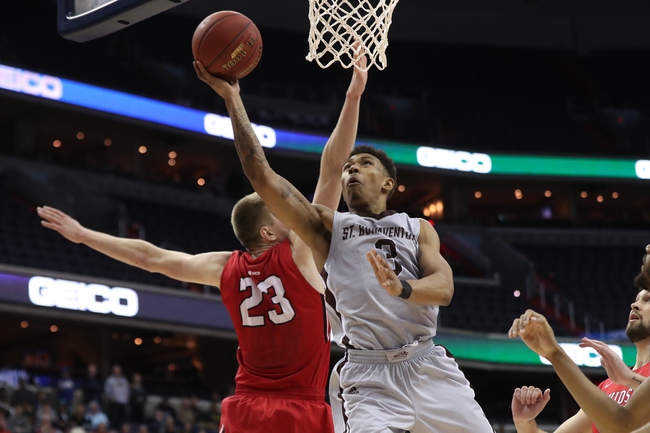 The Davidson Wildcats and the St. Bonaventure Bonnies meet in college basketball action from Reilly Center on Friday.

Davidson enters this one at 12-11 on the year. The Wildcats are 2-2 in their last four games, losing to George Washington and VCU while beating UMass and Fordham otherwise in that time.

In the win over the Rams, Davidson’s Mike Jones led the team on 15 points and two rebounds. Kellan Grady added 13 points, five assists and four boards there, and Jon Axel Gudmundsson had 13 assists, nine rebounds and five points.

Over on the St. Bonaventure side, they’re 17-8 this year. The Bonnies are on a five-game winning streak right now, beating Fordham, George Mason, George Washington, Duquesne and Saint Joseph’s.

In the win over the Hawks, St. Bonaventure’s Justin Winston and Kyle Lofton each scored 20 points with three assists, and the duo combined for 11 rebounds. Osun Osunniyi chipped in 12 points and nine boards in that one as well.

Outside of what ended up being a tepid effort against VCU, the Wildcats have put up some pretty strong outings lately. Davidson has hit at least 71 points in five of their last seven games, and is 5-2 during that time.

St. Bonaventure has been on a nice run over their last six games or so as well, and they’ve remained pretty competitive throughout. This should be a pretty interesting matchup, but if Davidson can get some shots falling early and play like they’re capable, I can see the Wildcats covering here.