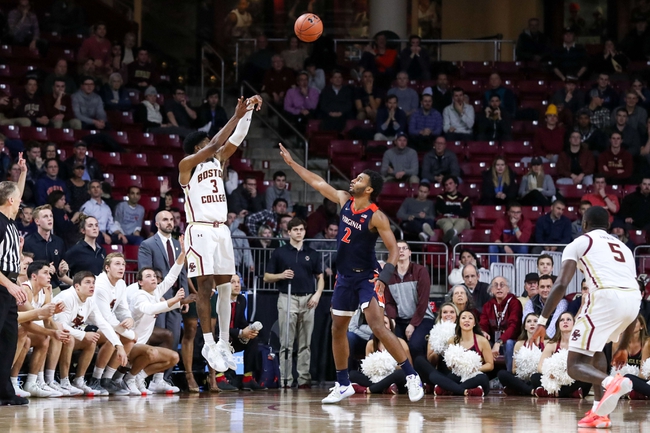 The Boston College Eagles and the Virginia Cavaliers meet in ACC college basketball action from the John Paul Jones Arena on Wednesday night.

The Boston College Eagles will look to leapfrog some teams in the middle of the ACC standings, sitting at 7-8 in conference play after a 71-68 win over NC State last time out. Derryck Thornton leads BC in scoring and assists with 13.1 PPG and 3.6 APG while Jay Heath has 12.6 PPG and Nik Popovic is averaging 10.5 PPG. Steffon Mitchell is averaging 7.2 PPG and a team-high 8.4 rebounds per game this season. As a team, Boston College is averaging 64.8 points on 40.5% shooting from the field, 30% from behind the arc and 66.2% from the foul line while allowing opposing teams to average 69 points on 43.3% shooting from the field and 32.7% from 3-point range this season. Boston College is 4-6 straight up and 5-5 against the spread on the road this season.

The Virginia Cavaliers will try to get closer to the top 3 in the ACC, sitting at 9-5 in conference play after a 64-62 win over North Carolina last time out. Mamadi Diakite leads Virginia in scoring with an average of 13.7 PPG while Kihei Clark has 10.3 PPG and a team-high 6.1 APG this season. Braxton Key is also averaging 9.7 PPG and a team-leading 7.2 RPG this season. As a team, Virginia is averaging 56.8 points per game on 40.7% shooting from the field, 29.2% from behind the arc and 70.5% from the foul line while allowing opposing teams to average just 52 points on 36.7% shooting from the field and 29.2% from behind the arc this season. Virginia is 11-3 straight up and 4-10 against the spread at home this season.

Head-to-head, the underdog is 9-4 ATS in the last 13 meetings between these two teams.

This is a ton of points to lay with Virginia as the Cavaliers a lot of times don’t put up the kind of offense to cover these bigger numbers. However, Virginia’s defense is an equalizer that makes up for the lack of offense and sometimes ends up behind the difference in these games with the bigger lines while Boston College really doesn’t have anything that stands out and makes them anything more than a below average ACC team. I just think this is a game that Virginia frustrates BC and forces the Eagles to make a ton of mistakes, so I’ll lay the points with the Cavaliers at home here.