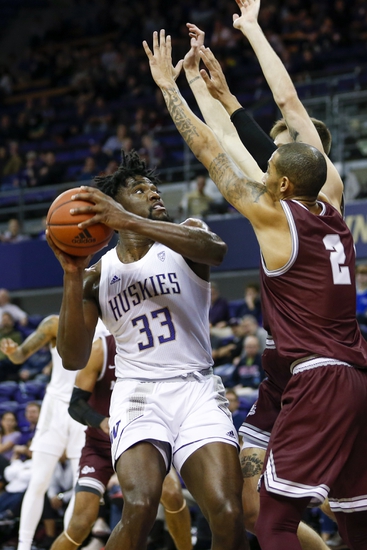 In the Coyotes loss to Northern Arizona, South Dakota was led on offense by Stanley Umude.  Umude recorded a double-double in the game, finishing with 18 points and 14 rebounds.  The Coyotes shot 50% from the floor and 58% from 3-point range.  The difference came down to the foul line.  The Coyotes were out scored 20 to 15 from the line.  Northern Arizona had 14 more free throw attempts then the Coyotes.  South Dakota had 14 turnovers in the loss.

In the Huskies win over San Diego, Washington was guided on offense by Isaiah Stewart.  Stewart collected 25 points and 7 rebounds, while blocking 1 shot on defense.  The Huskies shot 58% from the floor and 41% from deep.  Washington out rebounded San Diego 33 to 27.  TheHuskies had an assist to turnover ratio of 20 to 10.

Coyotes are 0-4 ATS in their last 4 road games.

Coyotes are 5-1 ATS in their last 6 Monday games.

Huskies are 1-4 ATS in their last 5 Monday games.

Huskies are 3-7 ATS in their last 10 games following a SU win.

South Dakota has 6 wins, but really haven't had a tough schedule.  However, tip of the cap, as the Coyotes have won the games they should win.  Washington in my opinion will be one of the best teams in the country and have the ability to make a long run come March.  The Huskies have a solid win over Baylor, with their loan loss to Tennessee.  The Huskies have been making quick work of the mid majors that they have faced.  The Huskies who are allowing just 60 points defensively, will make it difficult for South Dakota to get into a flow. The Coyotes are allowing over 72 points per game, I'll take the Huskies here to win comfortably.  Final score prediction, Washington will win and cover, 78-61.