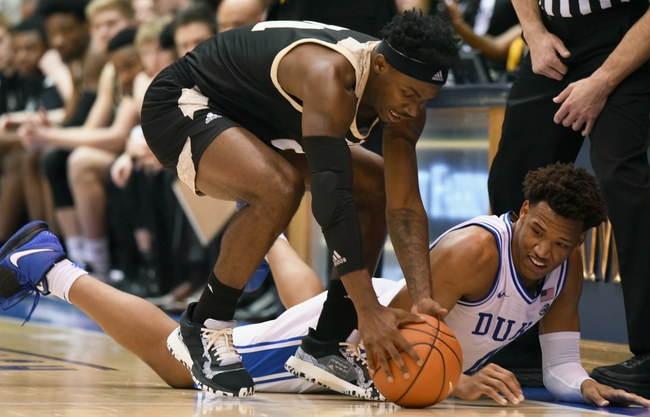 The Western Carolina Catamounts and the Wofford Terriers meet in SoCon college basketball action from the Richardson Indoor Stadium on Saturday night.

The Western Carolina Catamounts will try to even themselves with Wofford despite back-to-back losses dropping the Catamounts to 7-6 in SoCon play after an 82-62 loss to UNC-Greensboro last time out. Mason Faulkner leads the Catamounts in scoring and assists with 17.4 points and 5.9 assists per game while Carlos Dotson is 2nd in scoring and tops in rebounding with 15.1 points and 9.9 rebounds per game. Onno Steger is averaging 11.8 points and Matt Halvorsen is contributing 10.3 points per game to finish off the scoring in double figures for Western Carolina this season. The Catamounts are averaging 78.2 points per game on 46.3% shooting from the field, 36.8% from behind the arc and 69.6% from the foul line while allowing 74.4 points on 43.2% shooting from the field and 29.9% from behind the arc this season. Western Carolina is 7-6 straight up and 7-5-1 against the spread on the road this season.

The Wofford Terriers will try to establish some space between themselves and the logjam in the middle of the SoCon after back-to-back losses, falling to 8-5 in conference play following a 70-68 loss to Mercer last time out. Nathan Hoover leads Wofford in scoring with 15.3 points per game while Storm Murphy is 2nd in scoring with 12.3 points and a team-high 3 assists per game and Chevez Goodwin is 3rd with 12 points and a team-high 6.4 rebounds per game this season. As a team, Wofford is averaging 73.2 points on 46.1% shooting from the field, 35.3% from behind the 3-point line and 71.7% from the foul line while allowing opponents to average 67.8 points on 43.8% shooting from the field and 32.4% from the foul line this season. Wofford is 10-3 straight up and 5-5-1 against the spread at home this season.

I get Wofford being favored at home and there’s a definite revenge factor here. However, Wofford has looked mortal in losing their last two home games to Mercer and Chattanooga, and while Western Carolina has dropped back-to-back games, they came against UNC-Greensboro and Furman, which is hard to knock. I just think that Western Carolina is battle-tested enough to come in and keep this one reasonably close, so I’ll take my chances with Western Carolina and the points here.