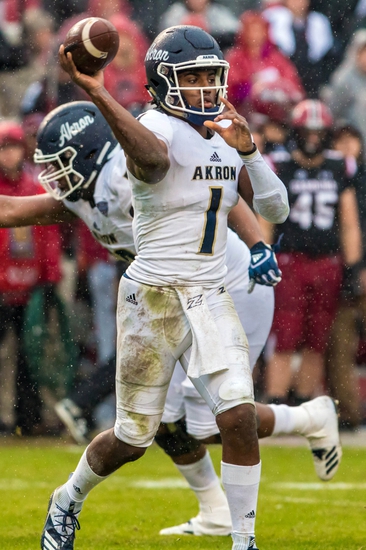 The Buffalo Bulls are set to visit InfoCision Stadium in Akron, Ohio for a MAC clash against the Akron Zips. The Buffalo Bulls come into this matchup with a 2-4 record, and they will be looking to rebound after dropping their recent home game against the Ohio Bobcats, 21-20 in OT. QB Kyle Vantrease had an efficient game through the air for the Bulls as he connected on 16 of his 23 pass attempts for 197 yards and 2 TDs. RB Kevin Marks received a heavy workload on the ground for Buffalo as he compiled 112 yards on 22 carries.

The Buffalo Bulls struggled on the defensive side of the ball as they allowed the Ohio Bobcats to score 21 points and rack up a total of 341 yards of offense. Junior safety Tyrone Hill led the way for the Buffalo defense with 15 tackles. Junior DEs Taylor Riggins and Malcolm Koonce were able to get into the Ohio backfield a handful of times as they combine for 3.5 sacks and 3.5 TFL. Junior LB Kadofi Wright contributed the lone interception of the game for the Bulls.

The Akron Zips come into this matchup with a 0-6 record, and they will be looking to rebound after dropping their recent home game against the Kent State Golden Flashes, 26-3. QB Kato Nelson accounted for most of the offense for the Zips as he threw for 202 yards while also adding in 64 yards on 14 carries. Junior WR Nate Stewart was the top target for Nelson and Akron as he hauled in 4 catches for 71 yards.

The Akron Zips struggled on the defensive side of the ball against the Kent State Golden Flashes as they allowed them to score 26 points and rack up a total of 382 yards of offense. Sophomore LB Bubba Arslanian led the way for the Akron defense with 15 tackles and a pass deflection. Junior LB Michael Scott was able to get into the Kent State backfield a handful of times as he contributed 2 TFL and a forced fumble.

The Akron Zips have been one of the worst teams in college football this season as they rank 129th in points scored and 118th in points allowed which is a problem on the road. The Buffalo Bulls have one of the best 1-2 punches in the backfield with Jaret Patterson and Kevin Marks as the duo has combined for 1130 yards and 6 TDs this season. The Akron Zips don’t have much hope on the offensive side of the ball, especially on the ground as they are only averaging 58.3 rushing yards per game which will allow Buffalo to key in on Kato Nelson and the aerial attack. I think Buffalo will come ready to play coming out of the bye week, and they will win big.