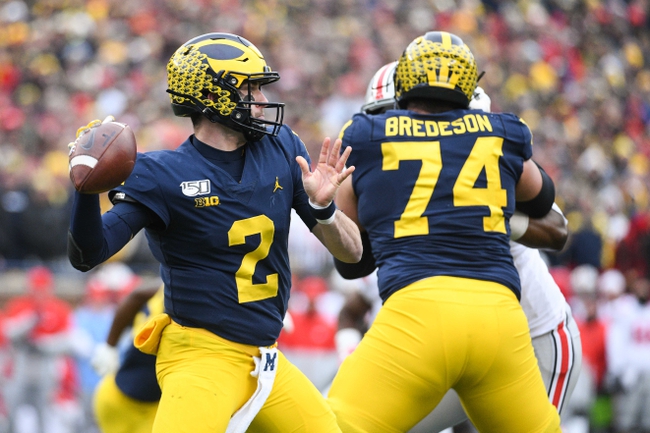 The Michigan Wolverines will take on the Alabama Crimson Tide in the VRBO Citrus Bowl at Camping World Stadium. It’s safe to say that both of these teams were eyeing the College Football Playoff at the start of the season. Alabama missed it for the first time … ever and Michigan came into the season as Big Ten favorites only to get washed out by Ohio State.

Michigan is led by Shea Patterson who has thrown for 2,828 yards and thrown for 22 touchdowns while freshman running back Zach Charbonnet has rushed 136 times for 642 yards and 11 touchdowns. Ronnie Bell has caught 43 receptions for 694 yards and a touchdown on the season.

Alabama’s quarterback, Tua Tagovailoa, will be sidelined for this game due to a hip injury that will keep him out for a while. Tagovailoa threw for 2,840, 33 touchdowns and just three interceptions. Mac Jones took Tagovailoa’s place and Alabama just wasn’t the same in the loss to Auburn.

Alabama averaged 513 yards on offense this season while Michigan only had 402.1 yards on offense. Michigan’s defense has become one of the best defenses in college football this season allowing under 300 yards from opponents this season. Najee Harris has been a force this season on the ground, running for 1088 yards and 11 touchdowns. Michigan has done a solid job stopping the run all season. Does Alabama air it out with Mac Jones or do they stick to the ground game and win that way?

Mac Jones has a lot of time to prepare for Michigan. The offense for Alabama can still make plays and keep up with a soft Michigan offense. Jones will have to make better decisions throwing the ball and if he can limit turnovers, Alabama should win this one by double digits.  Final Score Predictions, Alabama Crimson Tide wins 31-21.