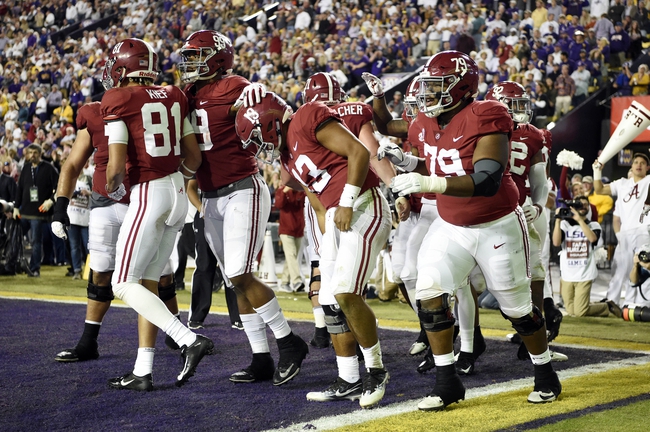 An SEC clash pairs the top two ranked team's in the country.  The top ranked LSU Tigers (8-0) travel to Tuscaloosa, AL to face the Alabama Crimson Tide (8-0).  Both teams are coming off bye weeks.   LSU enjoyed a win over Auburn 23-20 last time out.  Alabama most recently beat Arkansas 48-7.

In the win over Auburn, LSU quarterback Joe Burrow was 32 of 41 for 321 yds and touchdown.  Burrow also threw one interception in the game, while also adding a rushing touchdown.  LSU running back Clyde Edwards-Helaire had a dominating game out of the backfield, rushing for 136 yds on 26 carries and a score.  LSU out gained Auburn in the game, 508 to 287.  The Tigers rushed for a total of 187 yds on 46 attempts.

Crimson Tide was guided by quarterback Mac Jones.  Jones was 18 of 22 for 235 yds and three for 3 touchdowns.  Najee Harris contributed 86 yds rushing on 13 carries and 2 touchdowns.  Jerry Jeudy added 7 receptions for 103 yds and 2 touchdowns in the blowout victory.  Alabama did not allow a touchdown until the 4th quarter.  The Crimson Tide forced 4 Arkansas turnovers.  Alabama accumulated 459 total yds of offense.

LSU is 13-3 ATS in their last 16 road games vs a team with a winning home record.

Alabama is 7-2 ATS in their last 9 games following a bye week.

Alabama is 0-5 ATS in their last 5 home games vs a team with a winning road record.

The under is 8-1 in Alabama's last 9 games following a bye week.

Alabama has dominated the head to head series recently.  The Crimson Tide have won 8 of the last 10 meetings.  I think 6.5 points is a big under dog spread for the highest ranked team in the country.  The under has been profitable in the last 5 meetings in this series, going 5-0.  LSU is 1-5 ATS in the last 6 meetings against Alabama.  Burrow has done a great job in leading this Tigers offense all year and while LSU has not been profitable in covering the spread in recent meetings, I believe this is the year. The Tigers have played well on the road, especially against the spread.  Final score prediction, Alabama wins but LSU covers, 35-32.