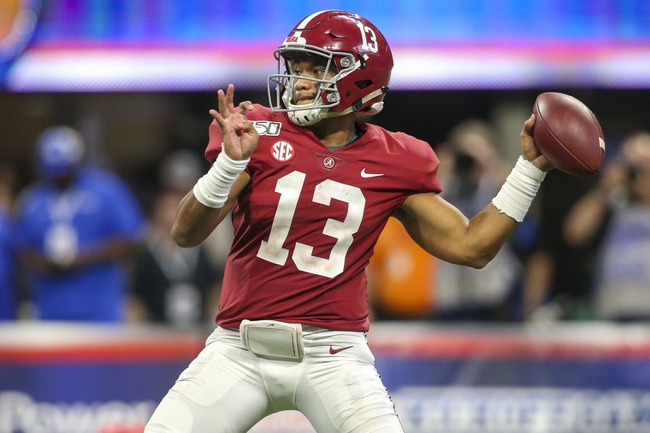 The New Mexico State Aggies and the Alabama Crimson Tide meet in a week 2 college football matchup from Bryant-Denny Stadium on Saturday afternoon.

The New Mexico State Aggies will look for a big time road upset after dropping their season opener last time out by a final score of 58-7 at the hands of Washington State. Josh Adkins threw for 221 yards and 2 interceptions on 28 of 42 passing while also rushing for the Aggies’ lone touchdown in the losing effort. Jason Huntley had 9 carries for a team-high 57 yards while OJ Clark and Tony Nicholson each had a team-high 7 receptions with Clark leading the Aggies with 47 receiving yards compared to Nicholson’s 40. Donovan King recorded a sack for New Mexico State’s defensive unit while Austin Perkins and Rashie Hodge Jr. had a team-high 5 tackles.

The Alabama Crimson Tide will look to build on a season-opening 42-3 win over Duke in their last outing. Tua Tagovailoa threw for 336 yards and 4 touchdowns on 26 of 31 passing while Jerome Ford rushed for 64 yards and a touchdown with his 10 carries. Najee Harris had 12 carries for 52 yards while Brian Robinson Jr. added a rushing score. Jerry Jeudy led the Tide with 10 receptions for 137 yards and a touchdown while Jaylen Waddle had 5 grabs for 90 yards and Devonta Smith, Miller Forristall and Major Tennison each had a receiving TD. Defensively, Terrell Lewis had a sack while Trevon Diggs and Jordan Battie each had an interception with Diggs adding a fumble recovery. Phidarian Mathis and Patrick Surtain II each had a team-high 3 tackles as well in the winning effort for the Crimson Tide.

I came into this game not knowing the line thinking that Alabama would be an astronomical favorite and they are. But as good as Alabama is, and how much New Mexico State is not the Tide, Alabama has been the kind of team to beat teams handily, but not the kind of team that’s demolished an opponent. Last game was a good example of the same thing we saw last season. Alabama flexes their talent, puts up points, but not to the extent of a 50-60 point win against a team that they don’t really care about.. If it’s a rivalry game like Auburn or Texas A&M, then I could see Alabama making an example of them in beatdown fashion, but even still, Alabama’s covered just one of their last five lines as a favorite of -35 or more. I think Alabama will get far enough ahead that they’ll use the Aggies as a tune-up for their backups to see some playing time and as such, I think New Mexico State stays within this outrageous number.