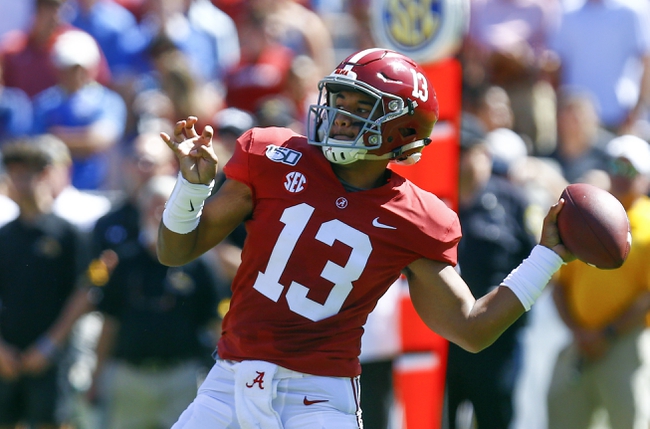 The Ole Miss Rebels will look to rebound after dropping their last game by a final score of 28-20 at the hands of Cal, dropping their record back to .500 at 2-2 on the year. Matt Corral has thrown for 844 yards, 4 touchdowns and an interception on 59.6% passing while Scottie Phillips leads the Rebels in rushing with 362 rushing yards and 4 touchdowns and Jerrion Ealy has contributed 129 rushing yards and 2 scores. Elijah Moore far and away leads Ole Miss’ receiving corps with 29 catches for 380 yards and 3 touchdowns this season. Defensively, Lakia Henry and Jalen Julius are tied for the team-high with 23 total tackles while Ryder Anderson, Sam Williams and Charles Wiley each have 2 sacks. As a team, Ole Miss is averaging 410 yards of total offense and 25.2 points per game while allowing 383.2 yards of total defense and 22.2 points per game against this season.

The Alabama Crimson Tide will look to remain unbeaten and build on their perfect 4-0 start to the year after a 49-7 beatdown of Southern Miss in their last outing. Tua Tagovailoa has thrown for 1,300 yards and 17 touchdowns on 77.7% passing while Najee Harris leads the Tide in rushing with 266 rushing yards and Brian Robinson Jr. has 138 rushing yards and 2 touchdowns. Jerry Jeudy leads Alabama with 30 catches for 404 yards and 6 touchdowns while Henry Ruggs III has 350 receiving yards and 4 TDs and DeVonta Smith has 20 grabs for 263 yards. Defensively, Xavier McKinney has 28 total tackles including 16 solo tackles, while Shane Lee has 24 total tackles and Anfernee Jennings has 3 sacks this season. As a team, Alabama is averaging 550 yards and 50 points per game while allowing 287.8 yards of total defense and 10.8 points per game against this season.

Ole Miss has been a thorn in the side of Alabama for quite a few years now, but that hasn’t been the case lately as Alabama has rolled over Ole Miss in the last two meetings by a combined score of 128-10. There’s reason for me to consider the points as this is a conference game and a rivalry game at that, and Bama has a tendency to take their foot off of the gas sometimes. However Alabama has outscored opponents 153-20 at home this season and beat up on South Carolina on the road, a Gamecocks team that I think is better than this year’s edition of Ole Miss. I think the Tide name their score here, but Alabama makes a statement with a big time win and cover in this one.