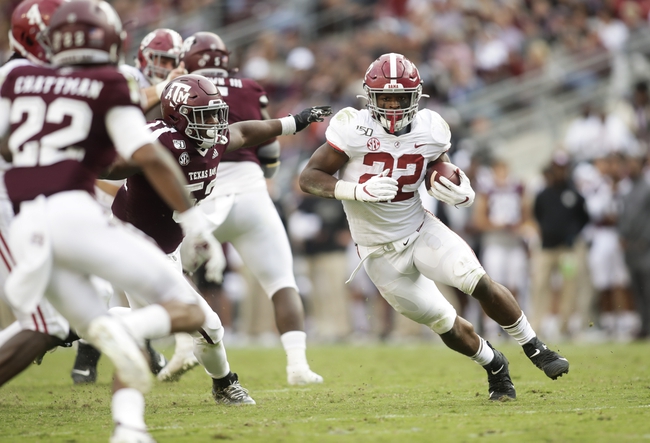 The Tennessee Volunteers visit Bryant-Denny Stadium in Tuscaloosa, Alabama on Saturday for an SEC clash with the No. 1 ranked Alabama Crimson Tide. Tennessee improved to 2-4 on the season with a 20-10 victory on Saturday over the Mississippi State Bulldogs. The Volunteers defense had three interceptions and shut down the running game of Kylin Hill, while the offense performed even though it lost starting quarterback Brian Maurer.

Alabama improved to 6-0 following its 47-28 victory over Texas A&M on Saturday. Tua Tagovailoa threw for 293 yard, four touchdowns and one interception in Alabama’s first game as the nation’s No. 1 team. Najee Harris rushed for 114 yards. Alabama outgained Texas A&M 448 yards to 389 yards. The Tide showed a bit of vulnerability in the secondary as Texas A&M passed for 265 yards.

Alabama quarterback Tua Tagovailoa has thrown for 2,011 yards and 27 touchdowns and one interception. Najee Harris leads all Crimson Tide running backs with 451 yards and one touchdown. DeVonta Smith is the leading receiver with 636 yards and nine touchdowns. The leading tackler for Alabama is Xavier McKinney with 47.

Tennessee is 1-4 ATS in its last 5 SEC games

Alabama will roll to an easy victory in this SEC matchup with Tennessee behind its talented quarterback Tua Tagovailoa, but covering a five-touchdown spread is no easy task even at home. The Crimson Tide has failed to cover each of its last 5 versus an opponent with a losing record and each of its last 4 following a win ATS. Final Score Prediction, Alabama Crimson Tide wins but falls short ATS 47-14