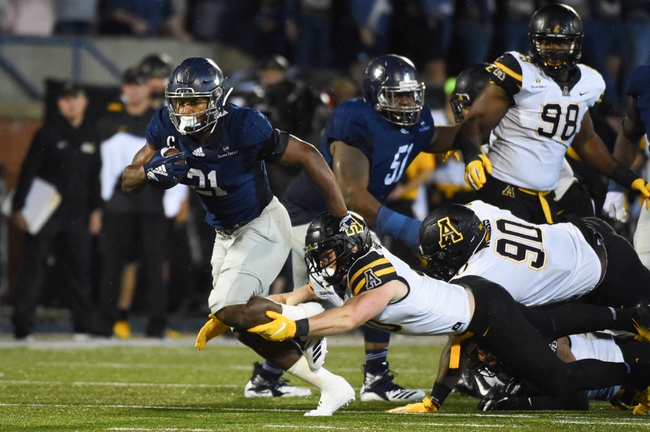 This matchup at Kidd Brewer Stadium in Boone, NC pairs two teams with winning record's together.  The  Georgia Southern Eagles  who are (4-3) on the season will play the host Appalachian State Mountaineers who is (7-0) on the season and ranked 20th. The Eagles enter this road contest on a 3 game winning streak.  Most recently the Eagles beat New Mexico State 41-7.  The Mountaineers ride their 7 game win streak into this home matchup.  The Mountaineers won at South Alabama 30-3 this past weekend.

Georgia Southern who is a run first team lived up to that expectation, the Eagles attempted 4 passes in the win over New Mexico State.  The Eagles rushed for over 400 yds on 56 carries and 4 scores. J.D. King and Wesley Kennedy III each had 143 yds rushing in the game and both had 2 touchdowns. The Eagles rank 15th in rushing yds per game, averaging 237.  The Eagles are giving up an average of 30 points per game on defense. On the season, quarterback Shai Werts has completed 22 of 44 passes for 179 yds and 2 touchdowns.  The Eagles have 1,819 yds rushing on the season.

Southern is 2-1 ATS after a win this season.

The over is 3-0 this season when Southern is an underdog.

The over is 2-2 when App. State is the home favorite.

This game is going to come down to which team can limit the damage done on the ground.  Both teams like to rush the ball, the only difference is, App. State can pass when needed.  App. State is not afraid to pass the ball, while Georgia Southern is a strictly rushing team. The Eagles rush the ball on just about 82% of their plays from scrimmage.  App. State has been profitable at home this year ATS going 5-2.  This game will be close till halftime and then App. State makes an adjustment to stop the run and pulls away in the second half.  Final score prediction, App. State will win and cover 34-17.