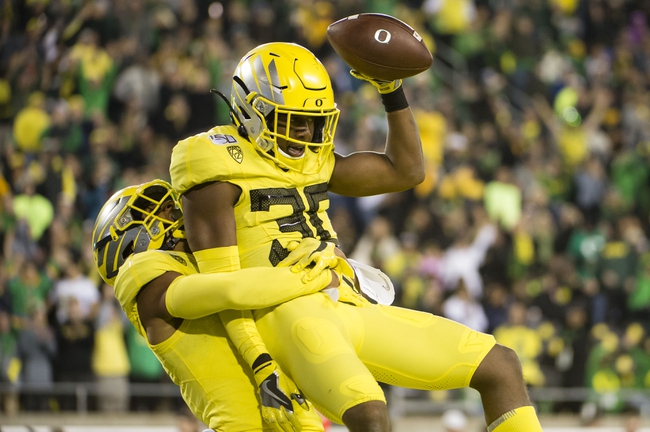 The Oregon Ducks visit Sun Devil Stadium in Tempe, Arizona on Saturday for a Pac-12 battle with the Arizona State Sun Devils. The Ducks will try to complete the sweep of the Grand Canyon State, following last week’s 34-6 win over the Arizona Wildcats. Justin Herbert’s 333 yards passing and 4 touchdowns led the way for Oregon, who have now won 9 in a row, ascending to No. 6 in the College Football Playoff rankings.

Herbert enters Saturday’s contest having thrown for 2,662 yards on the season, along with 28 touchdowns to just 3 interceptions. His top target is Jaylon Redd, who has hauled in 42 receptions for 396 yards and 7 touchdowns. CJ Verdell leads Oregon in rushing with 129 carries for 814 yards and five touchdowns. As a team, the Ducks are averaging 37.8 points per game, while allowing just 14.8 points per game.

Arizona State is trying to turn their season around and end on a positive note, after last week’s loss to Oregon State, which was their fourth consecutive defeat. In last week’s loss to the Beavers, the Sun Devils scored a late touchdown to pull within one, but their ensuing 2-point conversion failed and they fell by a final of 35-34. In the loss, Sun Devils QB, Jayden Daniels, threw for 334 yards, 3 touchdowns and 0 interceptions.

Daniels has thrown for 2,236 yards on the season, tossing 14 touchdowns, rushing for 3 more and throwing just 2 interceptions. Eno Benjamin leads Arizona State’s rushing attack, carrying the ball 188 times for 801 yards and 8 scores. He also has an additional 2 touchdowns through the air. Brandon Aiyuk is the team’s top wideout with 53 catches for 964 yards and 7 touchdowns. As a team, the Sun Devils score 24.7 points per game and allow 23.5 points per game.

Oregon is 5-2 ATS in their last 7 meetings in Arizona State.

The Under is 7-1 in Oregon’s last 8 games after allowing less than 20 points in their previous game.

Arizona State is 0-3-1 ATS in their last 4 conference games.

The Over is 4-0 in Arizona State’s last 4 games on grass.

Herbert and the Ducks appear to be on a mission, with their only blemish of the season coming in their opener against Auburn. Oregon still has an outside chance of making the College Football Playoff, and even though this will only be their fourth true road game of the season, they should have no trouble with a Sun Devils team that has been heading the wrong way lately. Final Score Prediction, Oregon wins and covers ATS, 38-10