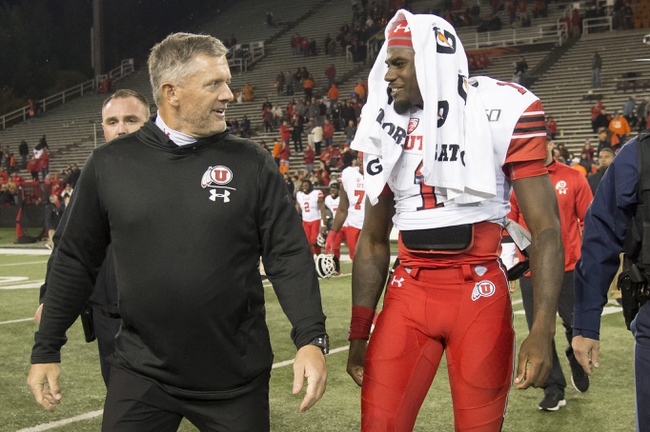 This pairing has a matchup of two 5 win ranked teams.  Arizona State comes into this matchup ranked 17th on the season with a 5-1 record. The Sun Devils come into this game on a 2 game win streak, most recently winning at home 38-34 against Washington State.  The only set back Arizona State has had thus far, was a loss to Colorado.  The Utah Utes enter this home matchup with a 5-1 record and ranked 13th. The Utes are coming off a blow out win 52-7 at Oregon State. Utah’s only loss so far was a road game at USC.

The Sun Devils have been led offensively by quarterback Jayden Daniels.  Daniels has completed 111/176 passing attempts for 1,610 yds.  He has a TD/INT ratio of 8/1. Eno Benjamin leads the backfield with 529 yds rushing  and 7 TD’s.  Brandon Aiyuk has 31 receptions for 651 yds and 5 scores. Defensively, the tackles leader is defensive back Evan Fields with 42.  Jermayne Lole leads the team in sacks with 2.5.

Quarterback Tyler Huntley leads the offense with 1,393 yds on 99/131 completions.  He has totaled 9 passing and 3 rushing touchdowns.  Zach Moss leads the backfield with 514 yds on the ground and has hit paydirt 6 times. Bryan Thompson has contributed 310 yds receiving and 2 touchdowns.  Linebacker Francis Bernard leads the team in tackles with 43.

The Utes are allowing just over 56 rushing yards per game, which is the 2nd best in the country. This is a notable stat, as Arizona State has used rushing as a key component to their offense. The Sun Devils are averaging 143 yds on the ground. Defensively the Sun Devils are holding opponents to 101 yds on the ground, which ranks 15th. With a matchup favoring two stout rush defenses, the two teams will be able to zero in on the passing attack. I think this will help Arizona State defensively in trying to hold Tyler Huntley in check.  Final score prediction, Utah wins but fails to cover 28-21.