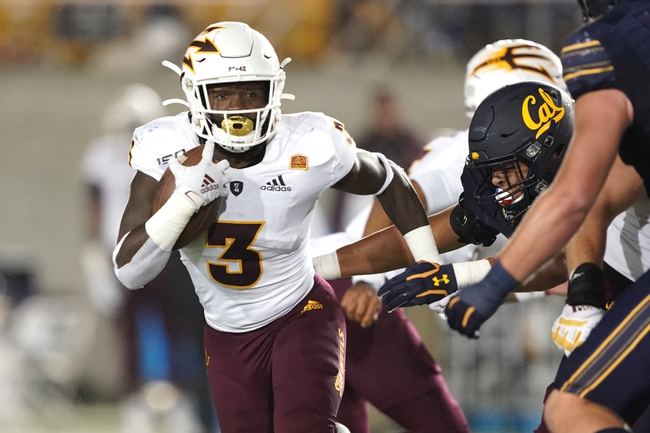 The Washington State Cougars struggled on the defensive side of the ball against the Utah Utes as they allowed them to score 38 points and rack up a total of 526 yards of offense. Junior LB Jahad Woods led the way for the Washington State defense with 11 tackles and a TFL. Sophomore DL Dallas Hobbs was able to get into the Utes backfield a handful of times as he contributed 2 TFL and 1 sack while junior DB Daniel Isom pitched in a sack.

The Arizona State Sun Devils come into this matchup with a 4-1 record, and they will be looking to continue their success after winning their recent road game against the California Golden Bears, 24-17. QB Jayden Daniels struggled to get much going through the air for the Sun Devils as he connected on 14 of his 24 pass attempts for 174 yards. RB Eno Benjamin had a big game on the ground for Arizona State as he ran for 100 yards and 3 TDs on 29 carries.

The Arizona State Sun Devils were good on the defensive side of the ball against the California Golden Bears as they held them to 17 points and a total of 245 yards of offense. Sophomore LB Merlin Robertson led the way for the Arizona State defense with 11 tackles and half a sack. Sophomore safety Aashari Crosswell had a big game from the secondary for the Sun Devils as he contributed 2 pass deflections and an interception.

The Washington State Cougars struggled in their recent game against the Utah Utes, and the Arizona State Sun Devils have a similar look to the Utes and that is a very good defense. The Sun Devils have been one of the best defenses in college football this season, and they have enough talent in the back end of their defense to cause some problems for the air raid offense. The Sun Devils will need to continue developing their young QB in Jayden Daniels, but they have one of the best backs in the Pac-12 with Eno Benjamin and I expect him to have a big game against a suspect Washington State defense. The Sun Devils are playing at home and coming off a bye week, and I expect them to edge out the Cougars.