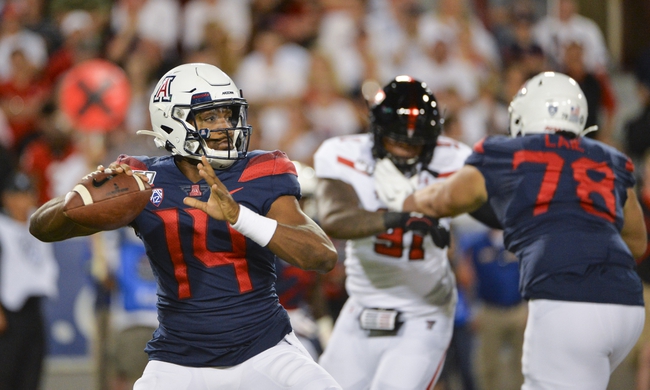 The UCLA Bruins and the Arizona Wildcats meet in a week 5 Pac-12 conference college football matchup from Arizona Stadium on Saturday night.

The UCLA Bruins will look to build some momentum after arguably one of the most memorable comebacks in college football history, rallying from 32 points down in the 3rd quarter to pull out a 67-63 win over Washington State in their last outing for their first win of the year. Dorian Thompson-Robinson has thrown for 1,063 yards, 10 touchdowns and 5 interceptions on 57.6% passing while Joshua Kelley leads the Bruins in rushing with 194 rushing yards and Demetric Felton is right behind with 177 rushing yards. Felton leads the Gators in receiving with 20 catches for 321 receiving yards and 3 touchdowns while Chase Cota has 168 receiving yards with 2 scores and Devin Asiasi is right behind with 164 receiving yards. Jaylen Erwin and Kyle Phillips are also 100-yard receivers for UCLA this season. Krys Barnes leads UCLA with 36 total tackles, including a team-high 25 solo tackles on the year. As a team, UCLA is averaging 361.8 yards of total offense and 27.2 points per game while allowing 530.2 yards of total defense and 39.5 points per game this season.

UCLA’s win over Washington State was one of the more shocking victories I personally have ever seen, and while that may be cause to jump on here and ride the momentum, I’m not so quick to do that yet. UCLA won that game, but Washington State helped the cause a lot by giving up the ball left and right and just forgetting how to play defense altogether. I didn’t give Arizona much credit for anything, especially against Texas Tech, but the Wildcats suffocated the Red Raiders and held a very strong Texas Tech offense to just 14 points. I think that Arizona flexes some muscle in this one, so I’ll lay the points with Arizona in what should be a comfortable double-digit victory.