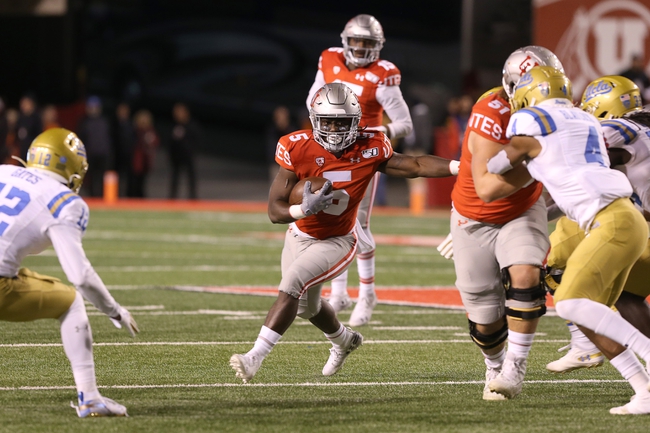 The Utah Utes visit Arizona Stadium in Tucson, Arizona on Saturday for a Pac-12 battle with the Arizona Wildcats. Utah is coming off a 49-3 throttling of UCLA last week, their largest margin of victory in a Pac-12 game ever. Zack Moss ran for 127 yards and two touchdowns and added 65 receiving yards, moving into second place for career all-purpose yardage at Utah. Tyler Huntley threw for a season-high 335 yards and two touchdowns on 14-of-18 passing and Brant Kuithe had a career-high 132 yards and a touchdown on five catches.

Huntley and Moss have been the catalysts offensively for the Utes, aiding in the school’s climb to No. 7 in the College Football Playoff Rankings. Huntley has thrown for 2,397 yards, 13 touchdowns and just one interception. He’s also rushed for another 5 scores. Moss has rushed the ball 154 times for 955 yards and 13 touchdowns, leading the way for the Pac-12’s top rushing attack.

After starting the season 4-1, Arizona has dropped five in a row, most recently to Oregon, 34-6. In those five defeats, the Wildcats have lost by an average of 21.4 points. J.J. Taylor had 17 carries for 74 yards and caught six passes for 55 yards for the Wildcats, passing Mike Bell for fifth on Arizona's career rushing list in the process. Khalil Tate also moved into fifth place on the Arizona all-time passing yards list in the opening half.

Arizona started freshman Grant Gunnell at quarterback. Head coach Kevin Sumlin said this week that practice performance would determine whether Gunnell or Tate would start against Utah. Tate has thrown for 1,687 yards this season, while Gunnell has thrown for 1,143 yards on the year. Taylor has carried the ball 124 yards for 640 yards and 5 touchdowns. His 26 receptions are also tied for third on the team.

Utes are 4-0 ATS in their last 4 games after allowing less than 20 points in their previous game.

Under is 7-0-1 in Utes last 8 games after accumulating more than 280 yards passing in their previous game.

Over is 7-0 in Wildcats last 7 games after scoring less than 20 points in their previous game.

Wildcats are 0-5 ATS in their last 5 conference games.

Utah is on a collision course with Oregon in the Pac-12 Championship, with the winner potentially earning a spot in the College Football Playoff depending on how things shake out with the rest of the elite. 5 straight losses has resulted in indecision at the quarterback position for Arizona so as long as Utah isn’t looking past this week’s opponent, they should handle their business. Final Score Prediction, Utah wins and covers ATS, 41-14.