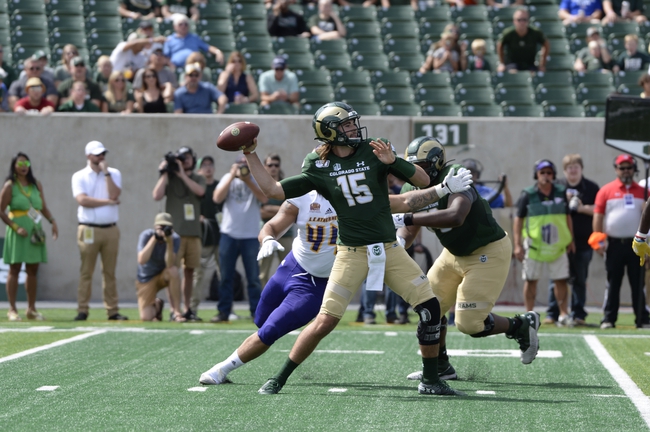 The Colorado State Rams will look to build on their first win of the season coming in the form of a 38-13 win over Western Illinois in their last outing. Collin Hill has thrown for 738 yards, 7 touchdowns and 2 interceptions on 55 of 78 passing for a 70.5% completion percentage. Marvin Kinsey Jr. leads Colorado State in rushing with 130 rushing yards while Dante Wright has 2 rushing scores. Wright also leads the Rams in receiving with 180 receiving yards and 2 touchdowns while Kinsey Jr. has 160 receiving yards and 2 TDs and Warren Jackson has a team-high 15 receptions for 142 yards this season. Defensively, Jamal Hicks leads Colorado State with 16 tackles while Cam’Ron Carter has 12 tackles and Ellison Hubbard has a team-high 2.5 sacks while Toby McBride has a pair of sacks as well. As a team, Colorado State is averaging 543.5 yards of total offense and 34.5 points per game this season.

The Arkansas Razorbacks will look to rebound from their first loss of the season coming in the form of a 31-17 loss to Ole Miss last time out. Nick Starkel has thrown for 249 yards, a touchdown and an interception on 21 of 29 passing for a 72.4% completion percentage while Ben Hicks has 241 passing yards on 21 of 45 passing. Rakeem Boyd leads Arkansas in rushing with 181 rushing yards and a touchdown while Trey Knox leads the Hogs in receiving with 126 receiving yards and Mike Woods has a team-high 11 receptions for 114 yards this season. Defensively, Bumper Pool leads Arkansas with 15 tackles while Kamren Curl has 13 tackles and a pair of sacks. McTelvin Agim also has a pair of sacks while Gabe Richardson has 10 tackles and 1.5 sacks this season. As a team, Arkansas is averaging 378 yards of total offense and 18.5 points per game this season.

I had big time hopes for Arkansas against Ole Miss, but once again, the Hogs find a way to let me down against a team that they should at least keep close if not beat. Colorado State’s not a world beater by any means, but they’re the far better offensive team through the first two games so far and have the ability to run past Arkansas if the Razorbacks aren’t careful. If I were Arkansas I’d definitely be on upset alert here, but just to be safe I’ll take the points with Colorado State.