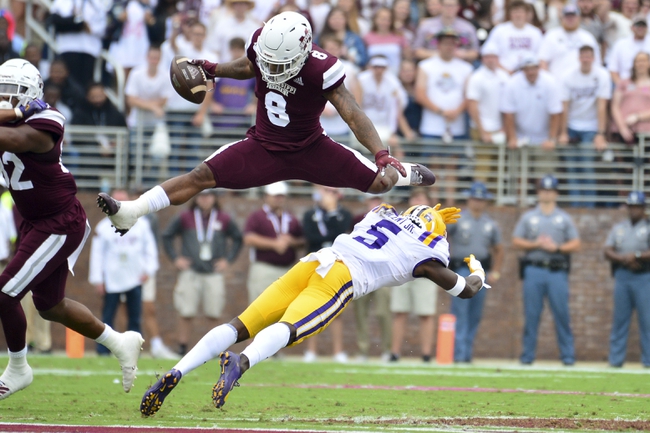 The Mississippi State Bulldogs visit Razorback Stadium in Fayetteville, Arkansas to play the Arkansas Razorbacks in an SEC showdown. Mississippi State fell to 3-5 on the season following a 49-30 loss to Texas A&M. Garrett Shrader threw for 194 yards and three touchdowns with one interception in the loss for the Bulldogs. Kylin Hill rushed for 150 yards and one touchdown.

Garrett Shrader has thrown for 1,022 yards, seven touchdowns and five interceptions for Mississippi State. The leading rusher is Kylin Hill with 793 yards and six touchdowns. Osirus Mitchell is the leading receiver with 344 yards and four touchdowns. Erroll Thompson leads the Bulldogs in tackles with 55.

Arkansas fell to 2-6 on the season following its 48-7 loss to Alabama. Arkansas was not able to put together any offense against the Tide’s defense. Nick Starkel started at quarterback for Arkansas and passed for just 58 yards with three interceptions. John Stephen Jones took over at QB in the second half and threw a touchdown pass.

The UNDER has cashed in 4 of the Razorbacks last 5

Arkansas has major problems at quarterback as that position has been a revolving door between changes for poor play and injuries. The running game has not offset the poor play at quarterback resulting in a weak offensive output. Mississippi State has one of the nation’s top running backs in Kylin Hill and the defense for the Bulldogs will shut down any attempt by the Razorbacks to mount an offense. Final Score Prediction, Mississippi State Bulldogs win and cover ATS 34-13

The pick in this article is the opinion of the writer, not a Sports Chat Place site consensus.
Previous Pick
Edmonton Eskimos at Saskatchewan Roughriders - 11/2/19 - CFL Picks & Predictions
Next Pick
Arizona Wildcats vs. Oregon State Beavers - 11/2/19 NCAA football Pick, Odds, and Prediction