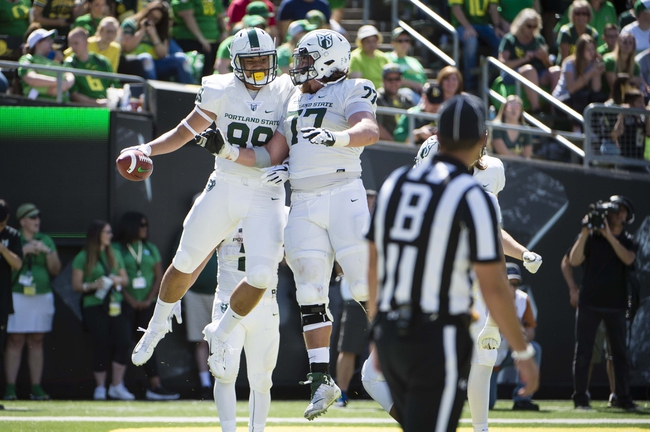 The Portland State Vikings will look to take another step in the right direction after going winless in 2017 to a 4-7 record in 2018, including a 3-5 record in Big Sky conference play. Davis Alexander and Jalani Eason are back under center for the Vikings with Alexander seeing the bulk of last season’s action, throwing for 1,786 yards and 11 touchdowns on 52.9% passing while also rushing for 424 yards and 12 scores on the ground. Jalen Chatman also transferred into the program from Rutgers to compete for the starting pivot job at Portland State. The Vikings’ lost their top rusher in Darian Green, but Sirgeo Hoffman and Carlos Martin are back to take over ball handling duties in the Portland State backfield. Portland State brings back their top four receivers from last season, including Charlie Taumoepeau who led the Vikings with 28 grabs for 580 yards and 5 scores last season. Defensively, Kenton Bartlett and Semise Kofe are back up front while Romeo Gunt is Portland State’s top returning tackler at the safety position, finishing 3rd on last year’s squad with 58 tackles. As a team, Portland State averaged 393.6 yards of total offense and 27.5 points per game while allowing 419.3 yards of total offense and 36.2 points per game last season.

The Arkansas Razorbacks will look for a bounce back campaign after finishing the 2018 season with an overall record of 2-10, including a winless 0-8 mark in SEC conference play to finish in the basement of the SEC West division in head coach Chad Morris’ first year in charge. A pair of transfers are expected to battle for the starting QB job after Ty Storey went to Western Kentucky. Ben Hicks from SMU and Nick Starkel of Texas A&M fame will battle for the starting job with Hicks expected to be ahead after having experience playing for Coach Morris at SMU and was in the program in the spring. Rakeem Boyd will hope to stay healthy to lead the Razorbacks’ running back group after leading the team with 734 yards and a pair of touchdowns last season but missed time in the offseason with shoulder issues while senior Devwah Whaley had had a laundry list of injuries and injured his back in the offseason. Cheyenne O’Grady is back for another year to lead the receiving group for Arkansas after logging 30 grabs for 400 yards and 6 TDs last season, but the focus is on the recruiting class with the likes of Trey Knox, TQ Jackson, Treylon Burks and Shamar Nash preparing to make a difference sooner rather than later. Defensively, McTelvin Agim and TJ Smith lead the front line, while De’Jon Harris, who led Arkansas with 118 tackles last season is back in the middle linebacker role, but has to heal from a broken foot. Kamren Curl leads the Hogs’ secondary after coming up with 53 tackles last season and will need guys like Devin Bush and Greg Brooks to contribute right away in a young and inexperienced secondary. As a team, Arkansas averaged 335.6 yards of total offense and 21.7 points per game while allowing 413.2 yards and 34.8 points per game last season.

The points are tempting with Portland State as they bring back a huge chunk of their offense, and laying four touchdowns in week 1 with a team that won just two games last season is far from an ideal situation. However, there’s some serious talent under center for Arkansas coming into this season and I think that this could be a good chance to see what Arkansas has going for them this year. This could finally be the chance for Razorback Nation to have something to cheer about, so I’ll lay the points with Arkansas to start the season off with a bang.