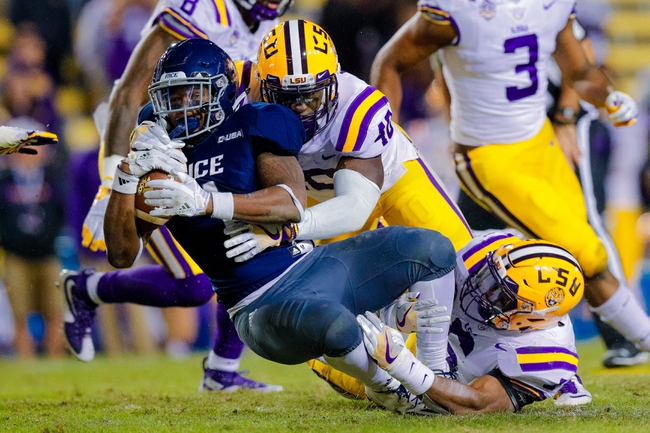 The Rice Owls come into the 2019 season looking to bounce back and record the program’s first winning season since 2014 after finishing the regular season with an abysmal 2-11 mark where the Owls’ lone wins came against an FCS team and a victory over Old Dominion in the final week that sandwiched an 11-game losing streak while also failing to score more than 29 points against any FBS opponent last season. Wiley Green is expected to take the reins following Shawn Stankavage’s graduation last season. Green threw for 621 yards, 3 touchdowns and 4 interceptions including a 313-yard passing game at home against UTEP last season, which also happened to be the closest margin of defeat for the Owls during their losing streak last season. Rice’s top two rushers from last season are gone, leaving the backfield duties up to Juma Otoviano and Nahshan Ellerbe. The plus side for Rice is that the trio of receivers in Austin Trammell, Aaron Cephus and tight end Jordan Myers is back to help handle some of the offensive workload this season. Defensively, Elijah Garcia has his hands full up front after Rice lost two of their top D-linemen from last season but the linebacking corps brings back Blasze Alldredge, Treshawn Chamberlain and Anthony Ekpe to help improve a defense that finished last in C-USA, allowing 36 points per game last season. As a team, Rice averaged 318.4 points and 18.9 points per game while allowing 446.2 yards of total offense and 36 points per game last season.

The Army Black Knights come into the 2019 season looking to build off of a second straight double-digit win season, posting an 11-2 record and culminating their season with a second straight win in the Armed Forced Bowl, this time with a 70-14 rout of Houston, the Black Knights’ third consecutive bowl victory in as many years. Kelvin Hopkins Jr. is back at QB for the Black Knights after becoming the first player in program history to surpass 1,000 yards rushing and passing in a single season. The Black Knights lost the services of Darnell Woolfolk and Andy Davidson, but bring back a pair of seniors in Connor Slomka and Kell Walker to take over the duties in the backfield for this coming season. Elijah Riley and Jaylon McClinton return to lead an Army Secondary and Cole Christiansen leads the front seven for a Black Knights defense that finished top-10 in multiple major defensive stat categories last season, including 8th in the country in total defense and 10th in scoring defense. As a team, Army averaged 392.7 yards of total offense including 312.6 rushing yards per game which was 2nd in the country, as well as scoring 32.8 points per game. Defensively, the Black Knights allowed 295.3 yards of total offense and 17.7 points per game last season.

Getting this many points in the opening game of the season is tempting as new guys are still trying to get their feet wet in a big setting, but the fact that this line is so thick just goes to speak to the gap that’s between Rice and Army right now. Rice couldn’t stop teams from scoring last season, and now have an inexperienced offense that is tasked to go score for score with one of the top rushing attacks in the country. Army did have quite a few close calls last season, but the Black Knights also hung on the road with Oklahoma. I just don’t see Rice having the answers to stop the Army option offense, so I’ll lay the points with Army at home here.