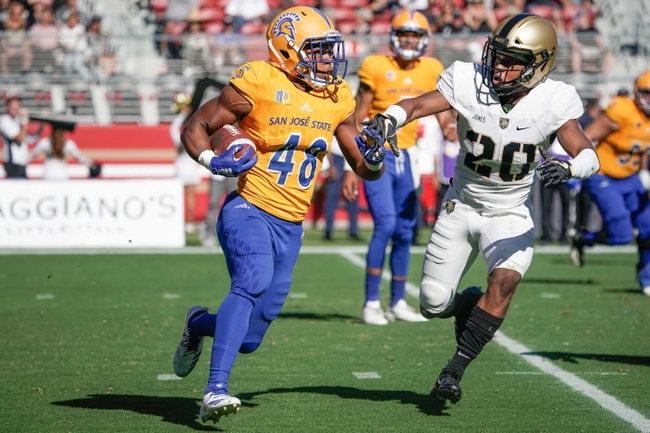 A non conference game pairs the San Jose State Spartans and the Army Black Knights in a showdown of two 3-4 teams.  The Spartans have lost two games in a row and 3 of their last 4. The Spartans are coming off a 27-17 home loss to San Diego State. Army has lost 3 in a row, after starting the season 3-1.  Army will be glad to be at home this week, after having been on the road the last two weeks.  Army lost Saturday at Georgia State 28-21.

In the loss to San Diego State, Spartans quarterback Josh Love was 19/36 for 218 yds.  He threw for 2 touchdowns but did get picked off once. Bailey Gaither led the Spartans in receiving with 75 yds on 4 receptions and 1 touchdown. For the season, Love has thrown for 2,041 yds and has a TD/INT ratio of 12/3. The Spartans leading tackler is safety Jay Lenard, he has 62 on the season.

Army who is a run first team, rushed for a combined 278 yds.  Army quarterback Kelvin Hopkins Jr. was 6/10 for 65 yds and an interception. Running back Sandon McCoy rushed for 71 yds on 19 carries and added 2 scores. Camden Harrison had 4 receptions for 58 yds in the loss.  On the season Army has rushed for 1,782 yds and 20 touchdowns. Linebacker Cole Christiansen leads the team with 70 tackles to this point.

The under is 5-2 in San Jose St games this season.

Army is 1-4 ATS as a favorite this year.

The under is 3-1-1 when Army is the favorite this season.

San Jose State has done well ATS over the last year and a half when on the road. Army on the other hand has been terrible ATS.  Army should win this game, thanks to San Jose State's 124th ranked rush defense.  The Spartans are giving up an average of 244 rushing yds per game. I am confident that the Spartans will be able to hold their own on offense and keep this game within reach, as they have done in recent games. Final score prediction, Army wins but San Jose State covers 30-21.