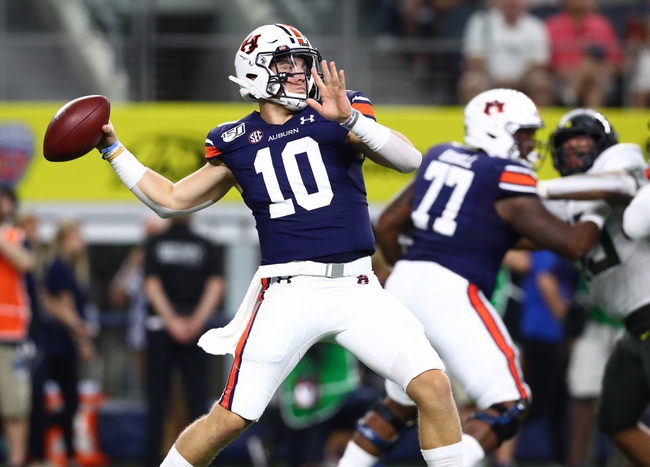 The Tulane Green Wave and the Auburn Tigers meet in a week 2 college football action from Jordan-Hare Stadium on Saturday night.

The Tulane Green Wave will look to build on a strong showing in their season-opening 42-14 win over FIU last time out. Justin McMillan threw for 199 yards and 2 touchdowns on 14 of 18 passing while Darius Bradwell led the Green Wave in rushing with 90 yards on 13 carries. Corey Dauphine had 76 rushing yard and a pair of touchdowns while the aforementioned McMillan and Amare Jones each added a rushing touchdown as well. Darnell Mooney and Tyrick James each had 4 catches with a receiving touchdown, with Mooney logging 84 receiving yards compared to James’ 60. Defensively, Thakarius Keyes had an interception and Cameron Sample added a fumble recovery while Patrick Johnson and Willie Langham each had a sack. Marvin Moody, Will Harper and Jaylon Monroe each had a team-high 3 tackles in the winning effort.

The Auburn Tigers will look to build on a solid victory in their season opener against Oregon by a final score of 27-21. Bo Nix threw for 177 yards, 2 touchdowns and 2 interceptions on 13 of 31 passing while JaTarvious Whitlow led the Tigers with 110 rushing yards on 24 carries and Joey Gatewood added a rushing touchdown. Sal Cannella led Auburn with 42 receiving yards while Seth Williams had a team-high 4 grabs for 41 yards and a touchdown. Eli Stove added a receiving TD of his own as well in the winning effort. Defensively, Auburn combined for 3 sacks while Big Kat Bryant logged a fumble recovery and Jeremiah Dinson had a team-high 8 tackles.

I’ll be one of the first to say that I wrote Auburn off in the opener against Oregon, and I was almost right, but Bo Nix decided to prove me wrong and rally the Tigers to a win in the dying seconds and look like a legit field general while doing it. Now Nix gets to have a home crowd behind him and while Tulane beat FIU handily, going from FIU at home to play Auburn on the road is at the completely other end of the spectrum. I just don’t see Tulane being able to keep up here and I see Auburn being too much for the Green Wave to handle, so I’ll lay the points with Auburn at home in this one.