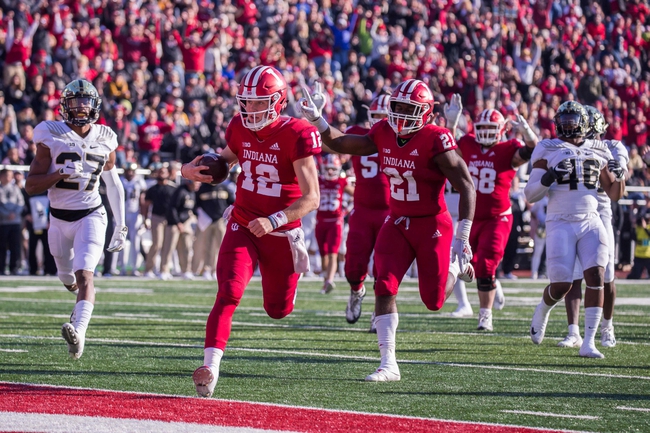 The Indiana Hoosiers and the Ball State Cardinals meet in week 1 non conference college football action from Lucas Oil Stadium in Indianapolis, IN on Saturday.

The Indiana Hoosiers will look to put forth a solid effort after finishing the 2018 season with a second straight 5-7 record under head coach Tom Allen, logging Indiana’s 23rd losing season in the last 24 years. Indiana started the year 3-0 with wins over FIU, Virginia and Ball state, and getting one win away from bowl eligibility before faltering at Virginia and then at home against Purdue in the season finale. Peyton Ramsey is back under center for Indiana, after throwing for 2,875 yards, 19 touchdowns and 13 picks on 66% passing last year. Ramsey will have stiff competition for the starting job though, with backups Michael Penix Jr. and freshman Jack Tuttle breathing down Ramsey’s neck. Stevie Scott returns in the backfield for the Hoosiers after racking up 1,137 rushing yards and 10 TDs on the ground last season while Nick Westbrook and Donavan Hale are back on the outside catching balls for the Hoosiers this season as well. Defensively, James Head brings an intense outside pass rush up front while Jerome Johnson and JUCO transfer Juan Harris given the task of stopping the interior run. Marcelino Ball will help bolster the linebacking corps and the secondary while James Miller, Reakwon Jones, Thomas Allen and Micah McFadden will rotate in the linebacker spots. Bryant Fitzgerald leads the secondary while Andre Brown Jr. and A’Shon Riggins are entrusted with containing the opposing receivers on the outside. As a team, Indiana averaged 415.2 yards of total offense and 26.4 points per game while allowing 423.8 yards of total offense and 29.9 points per game last season.

The Ball State Cardinals come into the 2019 campaign looking for their first winning season under head coach Mike Neu and first winning record since 2013 after finishing last year with a 4-8 record, including a 3-5 mark in MAC conference play last year. Ball State had a decent offense last season, but the Cardinals couldn’t produce when called upon, and now it gets more difficult after the Cardinals lost last year’s top QB and RB with Riley Neal now at Vanderbilt and James Gilbert gone to Kansas State. Drew Plitt is the likely starter for the Cardinals after throwing for 1,008 yards and 6 touchdowns last season but countered that by throwing 8 interceptions. The Cardinals will hope to get more in a full season with Caleb Huntley taking over starting running back duties while also bringing back their top two receiving threats in Riley Miller and Justin Hall, who combined for 130 receptions and 1,500 yards last season. Defensively, the Cardinals bring back nine starters from a team that finished 11th in the MAC last season in total defense and scoring defense, with Christian Albright, Ray Wilborn, Jaylin Thomas and Jacob White in the middle as the linebacking crew. Shannon Hall and Chris Crumb are the push up front while Antonio Phillips, Brett Anderson and Bryce Cosby make up the key cogs of Ball State’s secondary this season. As a team, Ball State averaged 409.1 yards of total offense and 24.2 points per game while allowing 450.4 yards and 32.4 points per game last season.

Ball State has a history of hanging around with Indiana over the years, with Indiana winning just three of the nine all-time meetings by 18 points or more. However, Ball State has just too many question marks on offense especially at quarterback and running back for me to put any faith in the Cardinals, even at a neutral site. Indiana has issues of their own, but they have a quarterback with experience and a quarterback who will also have to be at his best with backups who are ready to step in if he falters in the slightest. I just think Indiana will want to get off to another strong start to avoid another collapse this season, so I’ll lay the points with the Hoosiers here.