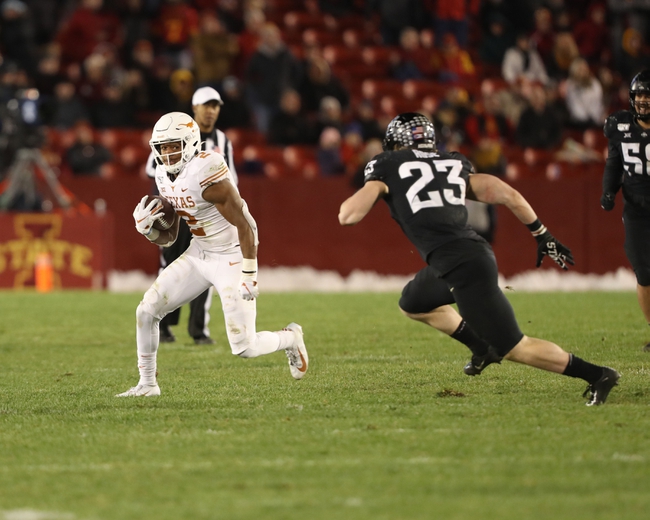 The Texas Longhorns visit McLane Stadium in Waco, Texas on Saturday for a Big 12 battle with the Baylor Bears. Texas fell to Iowa State last weekend when Connor Assalley kicked a 36-yard field goal as time expired, resulting in a 23-21 final. Sam Ehlinger threw for 273 yards and 3 touchdowns for Texas, losers of three of its last five.

With two regular season games remaining, Ehilinger has amassed 2,914 yards through the air, another 428 on the ground and 32 total touchdowns. Ehllinger’s 123 rushes are most on the Longhorns, one more than their leading rusher, Keaontay Ingram, who has rushed for 642 yards and 6 touchdowns. Devin Duvernay leads the Big 12 in receptions (87) and receiving yards (1.017).

Baylor had their College Football Playoff hopes dashed last week, falling to Oklahoma and snapping their unbeaten streak in the process. At one point, the Bears led the Sooners 28-3, but Oklahoma rallied for the largest comeback in school history and pulled off the 34-31 win. It was Matt Rhule and company’s first loss since November 17, 2018.

Baylor still may have a shot at redemption in a potential Big 12 Championship rematch with the Sooners, as they have been led by Charlie Brewer all season. Brewer has thrown for 2,532 yards, 18 touchdowns and only 5 interceptions. He also leads the team in rushing attempts with 112, totalling 276 yards on the ground and 9 touchdowns. His top target has been Denzel Mims, who has 50 receptions, 767 yards and 10 touchdowns.

Longhorns are 1-4 ATS in their last 5 games following an ATS win.

Under is 8-2 in Longhorns last 10 games after accumulating less than 100 yards rushing in their previous game.

Bears are 6-1 ATS in their last 7 games in November.

Under is 5-1 in Bears last 6 games in November.

There’s still plenty to play for for Baylor, who must move on and erase the memory of last week’s heartbreak. Texas, who hasn’t won back-to-back games since September, is looking to play spoiler and improve their bowl game placement. Final Score Prediction, Texas covers ATS and wins the game outright, 27-24.