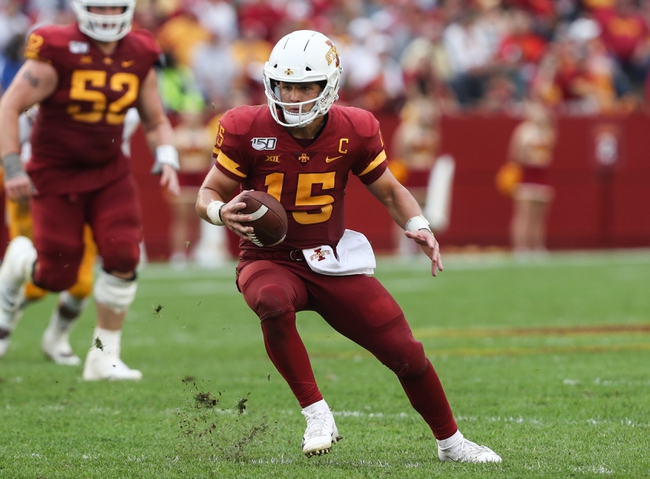 The Iowa State Cyclones and the Baylor Bears meet in a week 5 Big 12 conference clash in college football action from McLane Stadium on Saturday afternoon.

The Iowa State Cyclones have had an extra week to prepare after improving to 2-1 with a 72-20 romp over Louisiana-Monroe in their last outing. Brock Purdy has thrown for 989 yards, 6 touchdowns and an interception while Kene Nwangwu leads the Cyclones in rushing with 106 rushing yards. Tarique Milton leads Iowa State with 304 receiving yards and a pair of touchdowns while Deshaunte Jones has a team-high 20 receptions for 257 yards. Charlie Kolar and La’Michael Pettway are also 100+-yard receivers for the Cyclones this year. Defensively, Greg Elsworth leads Iowa State with 29 total tackles including a team-high 14 solo tackles, while Lawrence White is 2nd with 27 total tackles and O’Rien Vance has a team-high 3.5 sacks this season. As a team, Iowa State is averaging 531.7 yards of total offense and 39.3 points per game while allowing 333.3 yards of total defense and 21.3 points per game against this season.

The Baylor Bears will look for another victory to add to their current 3-0 start to the year after a 21-13 road win over Rice last time out. Charlie Brewer has thrown for 665 yards and 7 touchdowns while John Lovett leads the Bears in rushing with 186 rushing yards and Gerry Bohanon is right behind with 177 rushing yards. Trestan Ebner has 118 rushing yards and a pair of touchdowns while Denzel Mims leads Baylor’s receiving group with 249 receiving yards on 18 receptions with 3 touchdowns. R.J. Sneed is 2nd in receiving with 121 receiving yards and a pair of touchdowns and Chris Platt has 106 receiving yards this year. Defensively, Clay Johnston leads Baylor with 24 total tackles while James Lynch has a team-high 3 sacks this season. As a team, Baylor is averaging 497 yards of total offense and 46.7 points per game while allowing 261.7 yards of total defense and 14.7 points per game against this season.

This has been a streaky head-to-head series over the years, and you have a pair of solid offensive units going up against a pair of good defensive squads on the other side. With that said, Baylor is at home and getting points with a home dog is tempting, especially when they have the offensive firepower that Baylor does. However, The Cyclones have has recent success against Baylor and I’m not sure how much I trust the Bears after scraping by a pretty bad Rice team, even on the road. Iowa State’s has an extra week of rest to focus on this game and I think you could make the case that the Cyclones are the better all around team in this one. I’ll lay the points with Iowa State as I see the Cyclones making a statement on the road.