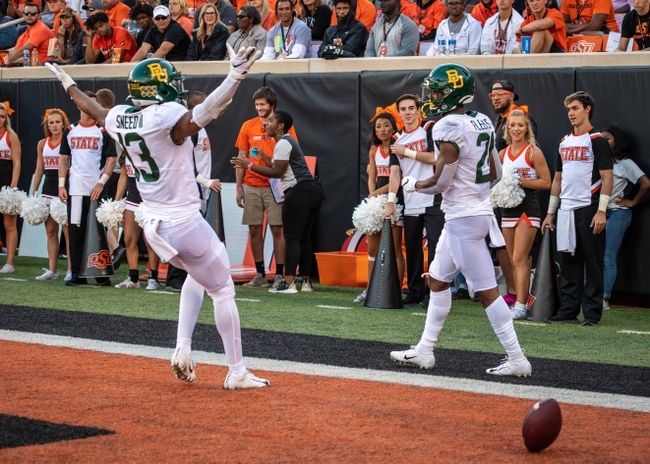 This primetime matchup pairs two highly ranked teams together in a Big 12 showdown.  The 9th ranked Oklahoma Sooners are (8-1) and will play the host, the 12th ranked Baylor Bears (9-0).  Oklahoma is coming off a 42-41 win over Iowa State. Baylor enjoyed a 29-23 road win at TCU last time out.

The Sooners were on the ropes of being upset by the Iowa State Cyclones, but the Cyclones 2 point conversion with 24 second left failed.  Cyclones quarterback Brock Purdy had his pass picked off to seal the victory for the Sooners.  Oklahoma quarterback Jalen Hurts was 18 of 26 passing for 273 yds, 3 touchdowns, while throwing 1 pick.  Hurts also added 2 rushing touchdowns.   Kennedy Brooks added 32 yds rushing and a score. The Sooners were out scored in the 4th quarter 20-0.

The Baylor and TCU game was back and fourth and the two teams actually played a few extra periods.  Baylor squeaked out a win and survived the 3OT game.  Baylor quarterback Charlie Brewer was 27 of 41 for 195 yds, 2 touchdowns, and an interception.  Brewer also added 41 yds rushing and another score.  Baylor was out gained 308 to 294 yds.  There were 5 turnovers between the two teams.  Baylor allowed 168 yds rushing.

Sooners are 1-4 ATS in their last 5 games overall.

Bears are 6-1 ATS vs. a team with a winning record.

The under is 7-3 in Bears last 10 conference games.

This game has all the intentions of being a great game.  Both teams are playing for the Big 12 title and looking to add a big win to their respected resumes.  Both teams have been average ATS this season, Oklahoma being 4-5 and Baylor going 5-4 thus far.  Three of the last four Oklahoma games have been decided by 7 points or fewer.  Baylor is not getting much respect here, being double digit dog at home.  Look for Baylor to come out similar to what Minnesota did to Penn State.  Baylor sneaks away here with a home win, but be safe and take the points.  Final score prediction, Baylor will win and cover, 31-28.