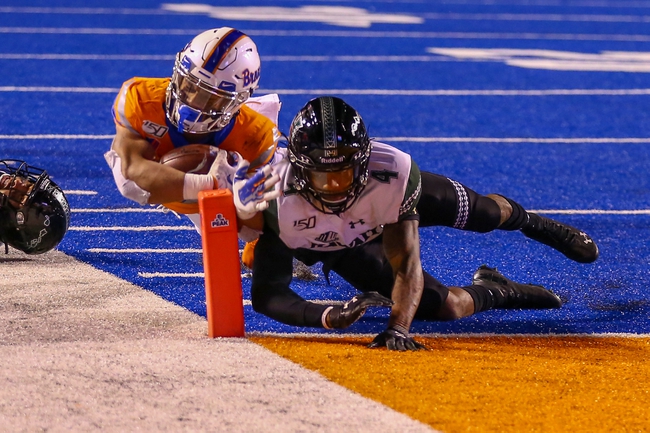 The Hawaii Rainbow Warriors travel back to Albertsons Stadium for the Mountain West Conference Championship to face the #19 Boise State Broncos. Boise State has won their last 5 games most recently a 31-24 victory on the road against Colorado State to improve to 11-1 on the season. Hawaii comes in on a 4-game winning streak the last one a dominating 21-point trouncing of Army 52-31 to improve to 9-4 on the season.

The Quarterback situation has been a carousel this season for the Broncos, with starting quarterback Hank Bachmeier missing the last 3 games with a shoulder injury and listed as questionable. Bachmeier threw for 1760 yards and 9 touchdowns in 6 games as the starter. If Bachmeier is unable to go the ball will be in Jaylon Henderson’s hands. Henderson has been exceptional this season throwing for 9 touchdowns to only one interception is the three games he started.

Boise State main play maker is runningback George Holani who has totaled over 1000 yards from scrimmage this year and 9 touchdowns. The ability to have a diverse back who can catch the ball out of the backfield and an easy check down target will help whichever quarterback starts keep drives alive.

Boise State hold the advantage on defense allowing only 21.5 points per game ranking 27th in the nation, while Hawaii allows 31.8 and ranking 100th in the nation.

Hawaii and Boise State met once already this season which ended in a decisive 59-37 Boise State victory.

Boise State’s defense will enjoy the second crack at Hawaii and limit them to less points than the first time around and Boise State will claim the Mountain West conference championship. Breezing to a victory and covering the 2-touchdown spread. Final score prediction, Boise State 40 Hawaii 25.